Albemarle soccer moves to 2-0 with win over Eagles 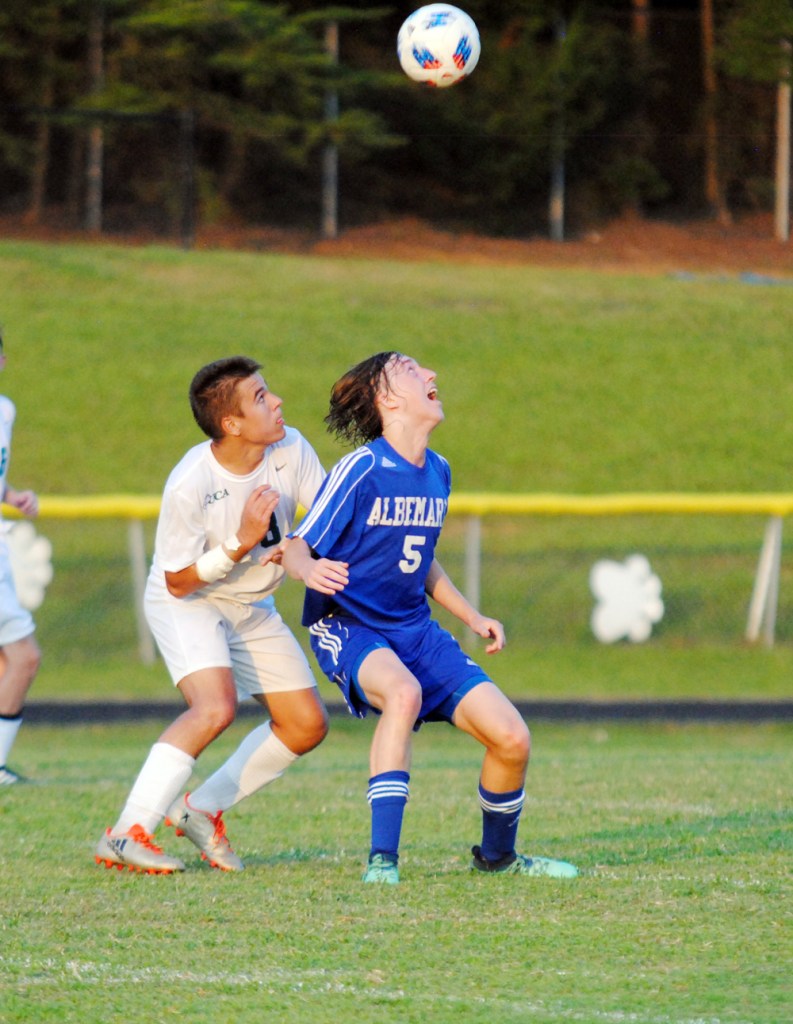 Albemarle's Josh Megson and a Uwharrie Charter defender battle for possession of the ball after a big bounce into the air in Wednesday's match. Megson scored two goals in a five-goal second-half for Albemarle. (Photo by Charles Curcio)

The Albemarle men’s soccer team took to its home field Wednesday having not played for more than a week.

A scheduled game with Anson County was postponed, meaning the Bulldogs’ next match went back to Yadkin Valley Conference play.

Five second-half goals broke a tied game wide open as the Bulldogs easily won 6-1 over the Eagles of Uwharrie Charter.

Ross Griffin scored early in the game for the Bulldogs (2-0, 2-0 YVC) only to see the Eagles tie the match midway through the first half.

In the second, Albemarle substituted liberally from the bench, sending waves of players back and forth into the game to stay fresh in the humid conditions.

The strategy paid off eight minutes into the second half as the Bulldogs earned a foul from 35 yards out and cashed in on a free kick. Jevanny Guillen-Perez sent a laser into the upper-right corner of the goal to put Albemarle up 2-1.

Senior Josh Megson then scored the first of his two goals in the game with 19:43 left on the clock. He took a long punt from keeper Da’Sean Horne off the bounce and made a run on a goal, scoring low and to the left side.

Just 12 seconds later, Megson got a clean steal of the ball from an Eagles player and fired a shot into the goal to put Albemarle up 4-1.

Leo Hernandez added a penalty kick goal off a handball call in the penalty box with 2:50 on the clock to round out the scoring.

This week, Albemarle hosts Mount Pleasant in a non-conference match on Tuesday and travels to North Moore on Wednesday.