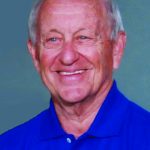 Grady Thomas “Tom” Rabe, Jr., of Albemarle, N.C. passed away on August 30, 2018. He was born in Badin, N.C. on November 21, 1924 to the late Marguerite Morrow Rabe and Grady T. Rabe, Sr.
He is survived by his wife of nearly 70 years, Jean, and daughters Lynn Poplin (Gerald) and Carol Rabe. He also leaves behind two grandchildren, Dustin Poplin (Carla) of Albemarle and Beverly Steinhaus (Nick) of Columbia, S.C., as well as three great-grandchildren, Braden Poplin, Sophie Poplin, and Jack Steinhaus.
Tom was a 1943 graduate of Albemarle High School, where he was elected president of his senior class and of the student body. He played both football and baseball and was a member of the 1940 National Champion American Legion Baseball team. Tom graduated from Catawba College in 1949 with a degree in accounting and later did graduate work at UNC-Chapel Hill in banking economics.
Tom served in the United States Army from 1943-1946 in both the United States and Italy.
Mr. Rabe was a lifetime member of First Presbyterian Church of Albemarle, where he served faithfully as deacon and as treasurer for 30 years.
He graciously volunteered his time and talent to whatever his church needed him to do, working with the Budget and Stewardship Committee, the Education Building Fund Committee, the Sanctuary Building Fund Committee, and the Organ Fund Committee.
Tom was a dedicated public servant and spent 10 years as a member of the Albemarle City Council and on the boards of the Stanly County Hospital, Stanly County Country Club, Stanly County Mental Health and Stanly Community College.
Always interested and involved in politics and government, he managed the local campaigns for many candidates for U.S. Congress, U.S. Senate and governor of North Carolina.
Tom will also be remembered for his continued support of numerous local charities and organizations.
Mr. Rabe enjoyed a long and distinguished career as owner and president of Albemarle Oil Company. During that time, he shared his business acumen as director and chairman of the board of First National Bank and director of both First Union Bank of Albemarle and First Bank of Troy. He also served as the GTR, LLC manager for many years.
A memorial service to celebrate a life well lived will be held in the sanctuary of First Presbyterian Church of Albemarle at 11 a.m. on Tuesday, September 4. A reception and celebration of life will follow at the church.
Memorials may be made to First Presbyterian Church (P.O. Box 1578, Albemarle, NC 28002), Friends of Morrow Mountain (P.O. Box 306, Badin, NC 28009), or GHA Autism Supports (P.O. Box 2487, Albemarle, NC 28002).