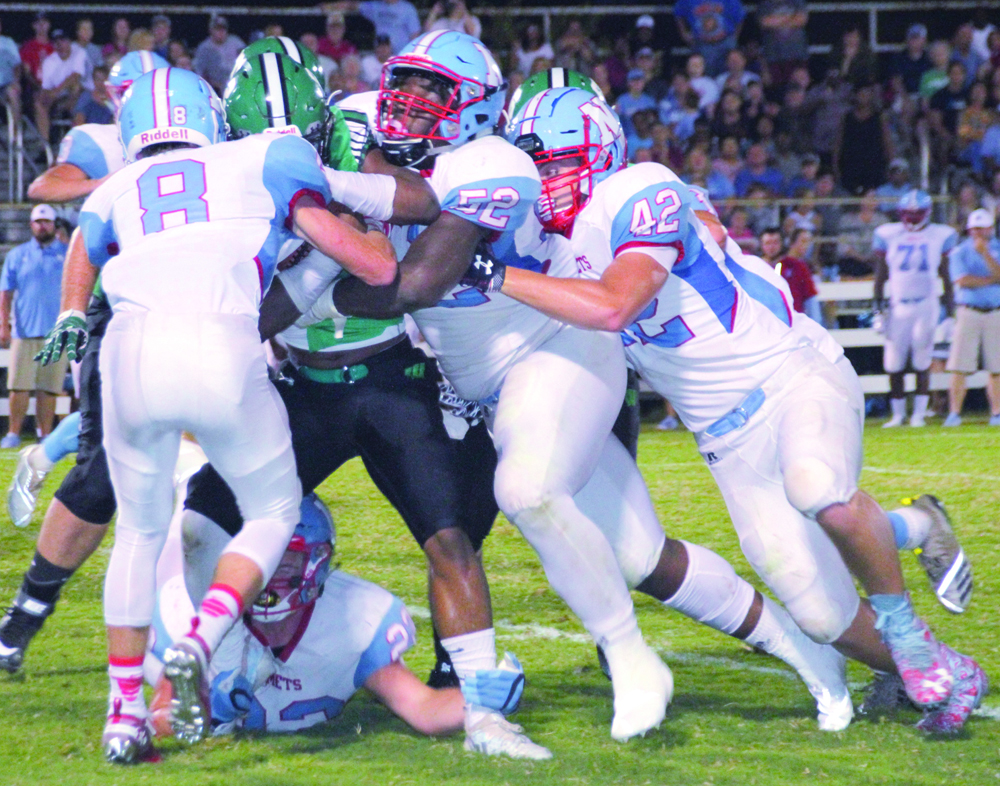 The North Stanly Comets entered Friday’s road game at West Stanly having a week off due to not having an opponent last week. Central Academy was to be North’s foe last week, but the Cougars opted to play a JV schedule.

Head coach Scott Crisco said initially his first reaction was to not like having a bye week that early. However, the Comets got a week of rest and conditioning in to prepare for a county showdown with the Colts in Red Cross.

North’s offense got rolling in the second quarter and the defense for the Comets (1-1) shut out West in a 28-0 win.

West’s strategy in the game was to sustain long drives and keep the Comets’ offense off the field. The Colts had the ball for 28:39 of a possible 48 minutes, including a 25:41 to 10:19 advantage after three quarters. West ran 45 plays in the first three periods to North’s 23.

What the Colts could not do was put points on the board. The closest West got to the end zone was late in the third quarter when a Colts’ drive ended on downs at the Comets’ 27-yard line.

North ended up with 223 net yards of rushing offense. Cameron Davis led the way with 118 yards on 18 carries with two touchdowns. D.J. Rhone added 109 yards on 15 rushes with a late touchdown as well.

Through the air, Bailey Baker, playing against his former teammates at West, was 3-for-5 for 56 yards and one touchdown.

Defensively, North limited West to 120 net yards of rushing offense on 44 attempts, for an average of 2.7 yards per carry. Lukas Scott led the way with 62 yards on 16 carries.

Nick Parker completed one pass out of six attempts in the game for 29 yards, throwing an interception late in the first half.

West possessed the ball for nearly nine minutes in the first quarter while North had one three-and-out then had the ball for the final minute of the period. In that drive, Davis had an 89-yard touchdown run called back on a holding call. The drive ended on a Rhone fumble recovered by West’s Koltyn Hatley. (Sports Editor’s Note: The previous sentence was edited from the print version to correctly identify who fumbled the football.)

With the Colts pinned deep, North’s defense stopped West on three straight plays then got a break when a punt off the foot of Aldo Cruz went for just seven yards.

Taking over at the West 20, Baker found Garrett Clark three plays later on a skinny post from a triple wideout formation for a nine-yard touchdown pass. Addison Cord’s extra point put the Comets up 7-0 with 6:41 left in the first half.

West mounted a strong late drive in the first half, including a 29-yard completion from Parker to Jordan Poole. However, Parker’s next pass on the drive was picked off by Colby Russell at the 20-yard line.

The Comets took the opening kickoff of the second half, with Rhone’s return setting up North on the Comets 44. The drive was all runs by Davis and Rhone, with Davis completing the drive 94 seconds later with a 13-yard touchdown. Cord’s point after put North up 14-0.

West stayed on the ground on its next drive, chewing up four minutes but leading to a punt. After the Comets went three-and-out, the Colts put together the team’s deepest drive into North territory. Starting at the West 25, the Colts drove 48 yards in 12 plays, taking 6:32 going into the early stages of the fourth quarter. However, the drive ended on an incomplete pass on fourth and 7 at the North 27.

The Comets then stayed on the ground and put together a 5:25 scoring drive of 73 yards in 11 plays, all on the ground. Davis finished the drive with a 13-yard sweep to the right side of the line; the extra point gave North a commanding 21-0 lead with 3:49 left.

West tried to throw on its next offensive play as quarterback Harrison Montgomery rolled to his right and threw downfield. However, Cooper Hogan picked off the pass and returned it to the Colts 35.

Six plays later, Rhone dove over on second and goal at the West 2-yard line for the game’s final score. Cord tacked on the point after to give North a 28-point victory.

“I wouldn’t have gotten my touchdown without the offensive line and we wouldn’t have scored any,” Clark said about the North offense. “When you get the opportunity, you take it and go with it.”

Defensively, Clark said the defense’s focus was to “grind, grind, grind,” adding “we did what we had to do to get it done.”

Comets head coach Scott Crisco said even before the game reached halftime, “no matter what the outcome, Garrett Clark is our player of the game on both sides of the ball.”

Regarding the team’s offense, Crisco said his team “shot themselves in the foot”  early in the game but added “once we got hold of the ball, we had ground control…we mixed it up but didn’t have to pass as much as we thought we would have to.”

Crisco also said the balance between Davis and Rhone in terms of carries and yardage “was exactly what we were hoping for. Like I said at the beginning of the season, your carries will go down, but your production will go up because you will be fresh.”

West Stanly goes on the road for its third and final county game of the season. The Colts travel to Norwood Friday to take on South Stanly (2-1) who won at Jordan-Matthews 37-6.