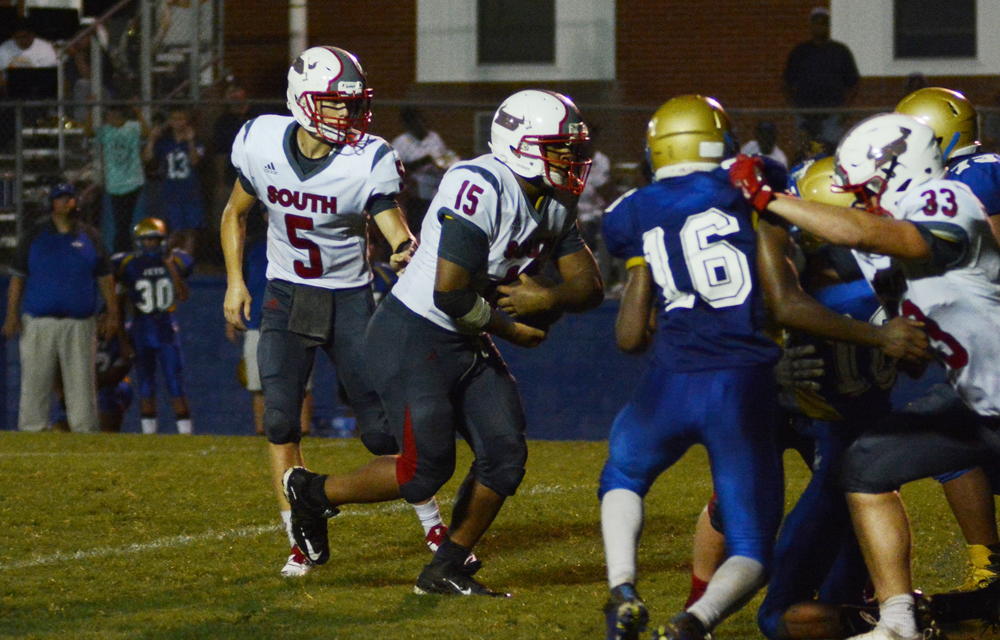 South Stanly's Khris Mayo gets the handoff from Justin Gaddy and heads upfield. Mayo scored five times on the ground in a 37-6 road win Friday at Jordan-Matthews. (Photo by Starla Whitley)

The South Stanly Rebel Bulls went on the road to Siler City Friday night to take on the Jordan-Matthews Jets.

After the hosts came through smoke onto the field, the only offense on fire in the game were the visiting Rebel Bulls. South took an early lead, scored in every quarter and never trailed en route to a 37-6 win.

Khris Mayo added to his county lead in touchdowns scored with a big night for the Bulls (2-1). He rushed for 155 yards on 19 carries with five rushing touchdowns. Marcus Green added 66 yards on nine carries. As a team, the Bulls rushed for 297 yards on the night, adding 79 passing yards to the team’s total from quarterback Justin Gaddy.

South limited Jordan-Matthews to 135 net yards and eight first downs on 55 total plays defensively. Rodney Hammond led the Bulls with four tackles, including two for a loss. Hammond, Jitavis Huntley and Cade Whitley also each had a sack in the game. Huntley had three tackles for a loss while Whitley had two along with Joey Dorko and Khris Mayo.

The game started auspiciously for South as the Bulls got the opening kickoff but lost the ball on the first play on a fumble.

Jordan-Matthews got a 34-yard gain from Jai’ Mason on its first drive. However, the drive stalled when a pass on fourth down at the South 19 fell incomplete.

South went three-and-out on its next drive, but the Bulls’ defense came up big on the Jets’ next possession. With a fourth down and 3 at the South 44, a sweep lost four yards with Dorko making the stop.

The Bulls drove 52 yards in five plays including a fourth-down conversion in the middle of the field on a fake punt.  Gaddy connected with Tori Colson for a 41-yard pass down to the Jets 6-yard line. Mayo scored his first TD on the next play and Brandon Crump’s extra point put South up 7-0 with 3:13 left in the first quarter.

Jordan-Matthews fumbled on its next offensive play on a bad snap. It was recovered by South’s Chase Kimrey.

The Bulls cashed it in with an eight-play, 40-yard drive, capped off on the first play of the second quarter with a four-yard Mayo TD run.

South’s defense stopped Jordan-Matthews on the team’s next possession, but a close call nearly gave the football to the Jets. Tony Loftin, trying to return the punt, was leveled by a Jets defender. The ball came lose but Loftin got the ball back from three defenders in a pileup.

The Bulls nearly scored again in the second quarter but fumbled on the 7-yard line to Jordan-Matthews.

Late in the first half, the Jets scored the team’s only points of the game. South had the ball at the Bulls’ 27-yard line facing a second down and 15. Gaddy went for a swing pass but Jamonie Williams picked the ball off and returned it for a touchdown. South’s Davis Moose blocked the extra point and the score stayed in favor of the Bulls, 14-6, with seconds left in the first half.

In the second half, South stopped the Jets on the hosts’ first drive but the Bulls gave the ball back on a lost fumble. South then drove 33 yards on six plays capped by Mayo’s third rushing score.

South continued to add to the lead early in the fourth. The Bulls drove 89 yards in six plays, including runs of 15, 26 and 14 from Green, capped by Mayo sprinting around the right side of the line 19 yards for a touchdown. Crump’s extra point put South up 28-6 with 11:03 left in the game.

The Bulls’ final scoring drive of the game covered 71 yards in seven plays. Mayo got a big hole in the middle of the field from the offensive line and ran straight downhill to score his fifth TD of the game.

The final points of the game came on the ensuing kickoff. The ball got past the Jets’ returner. When he picked the ball up, he tried to take a knee in the end zone. However, he was ruled to have had possession of the ball before going into the end zone; when he kneeled down, it turned into a safety.

“We did a great job on both sides of the ball creating confusion,” South Stanly head coach Ryan Ochier said. “Defensively, we wanted to pin them inside and not let them around the edge. They had pretty good speed with their skilled positions.”

The South head coach added he felt the Bulls’ offense “could muscle their front four and push down the field. We were able to create a variety of options for Gaddy to choose from to mix up our plays.”

With Friday’s win total, South Stanly has scored 113 points in its first three games. It’s the most for a South team since the Bulls scored 104 points in three wins to start the 2011 season.

It’s the second-best start in terms of points scored for a Bulls team since the 1974 season when South scored 159 points to start the season. Included in that season was an 80-0 win over the Bulls’ opponent this week, West Stanly.