Mark Andrew Higdon, 55, of Kannapolis, was found peaceful in his home on Wednesday, August 29, 2018.
He had been an employee of Hendrick Toyota Concord for more than six years. 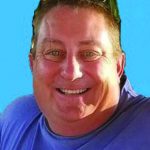 Mark’s final wish was to simply be cremated without a funeral service.
While Mark’s wishes are being carried out as he requested, you may continue to honor Mark with a charitable gift in his name (“Mark Higdon”) to “Kreitzer’s Critter Coral Puppy Rescue;” http://thepuppyrescue.com. This charity is also supported by Hendrick Toyota Concord.
Mark was born July 23, 1963 in Georgia to the late Harold and Mildred Higdon.
He was also preceded in death by his brother, Harold.
Survivors include uncle, William H. “Bud” Tucker; cousin, Steven Tucker; cousin, Dolan Tucker; and close friends, Stephen Holt and Kevin Sprague.
Although his family moved to Albemarle, North Carolina while he was in elementary school, he stayed true to his roots and was a faithful Georgia Bulldogs fan his entire life.
He was a wonderful person and he loved people and laughter. He really loved animals and posted a lot on Facebook about his last dog (son) “Shady.”
Mark was a people’s person when it came to relationships and he was masterful at sensing others and their needs quickly; this strong trait always aided him to be successful in business and in friendships.
He genuinely cared about his co-workers, friends and even people he would meet for the first time. He had a big heart and would open his home to anyone in need.
Earlier in his life, Mark spent a lot of time SCUBA diving and parasailing. He always found the beach to be a perfect getaway.
If you knew Mark, then you also knew his sense of humor was hilarious and receiving emails signed “Handsome Higdon” would be the expected.
Mark graduated from Albemarle High School in 1981 and then studied Mathematics at the University of North Carolina, Charlotte, N.C.
He started his sales career with Pitney Bowes in 1984. Later, he was awarded top salesman several years in a row in the 1990s during his employment with Oakwood Homes.
Since 2012, Mark was a consistent top performer at Hendrick Toyota Concord, earning him several awards and vacations.
Mark loved his home and his neighborhood, and he will be sadly missed.
On any given week, you could find Mark spending time to assist the elderly, keeping up with more than 100-plus friends and family and working and caring for anyone who needed it.
Mark was a good soul, excellent friend, dedicated worker and a very charitable person! Mark will be forever loved and dearly missed!
Hartsell Funeral Home of Concord is serving the Higdon family. Online condolences may be made at www.hartsellfh.com.