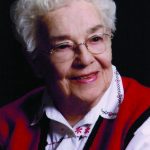 Alice Jane Timmons York of Greensboro passed away on August 8, 2018.

During WW II, Mrs. York was employed by the U.S. Navy at Harvard University in Cambridge, Massachusetts, at the U.S. Navy Underwater Sound Laboratory.

In her youth, Mrs. York was an avid student of the dance. On her return to Charlotte after WW II she taught dancing at the Henderson School of Dance.

Later, when residing in Stanly County, she established her own dancing school. She taught dancing to many young people and adults in the community.

When a knee problem forced Mrs. York to give up teaching dancing, she started a new career as a medical assistant in the office of Dr. Robert K. Dyer, where she served as receptionist, assisted Dr. Dyer in patient care, and handled the filing of insurance for patients.

During this time, Mrs. York organized the Stanly County chapter of the Medical Assistants Association and served as president for two years.

At age 55, Mrs. York went back to school and graduated from the Licensed Practical Nursing Program at Montgomery Community College in Troy, N.C.

For the next 10 years she worked in the infirmary at Pfeiffer College, where she was both friend and care giver to students.

In 1978, Gov. Jim Hunt appointed Mrs. York to the N.C. State Board of Nursing for a four-year term. Later Mrs. York worked in the Stanly Memorial Hospital Emergency Room.
Active in her community, Mrs. York participated in many civic activities. She was a member of the American Legion Auxiliary, Beta Sigma Phi Sorority, the Daughters of the American Revolution, the Stanly County Country Club, where she served as president of the Women’s Golf Association. She was a member of the Central United Methodist Church.

Mrs. York was preceded in death by her parents; one brother, William C. Timmons, III; and husband, J. Q. York of Badin, N.C.

A Celebration of her life will be held on Saturday, Sept. 15, 11 a.m. at Central United Methodist Church, Albemarle, N.C. Following the service, a reception for friends and family will be held at the Fellowship Center at the church.

Burial and graveside service will follow at 2:30 p.m. at the Evergreen Cemetery, 4426 Central Avenue, Charlotte, NC.

Online condolences may be made at www.haneslineberryfuneralhomes.com.