Albemarle volleyball wins at home over South Davidson in five

The Albemarle Bulldogs ended a six-game losing streak on Tuesday with a five-set Yadkin Valley Conference win over the South Davidson Wildcats. 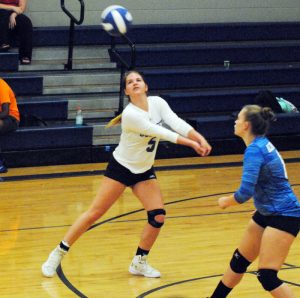 Albemarle’s Karlee Efird receives serve in a recent home game for the Bulldogs. She led Albemarle with 11 kills in a five-set win over South Davidson. (Photo by Charles Curcio)

Krystin McLendon reached double figures for Albemarle with 11 digs and made it a double-double with 22 assists.

Mallory Garnder led the Wildcats with 10 kills and nine aces. Bayli Medlin and Lacy Anderson each had 13 assists for South Davidson.