West Stanly volleyball bounces back with win over East Rowan 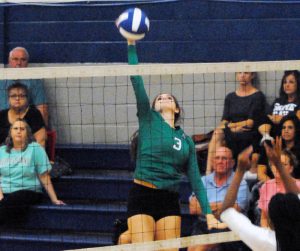 Madison Kee goes up for a kill in a recent road game. In Wednesday’s win over East Rowan, Kee led in three stat categories for the Colts. (Photo by Charles Curcio

The West Stanly Colts volleyball team bounced back from the loss earlier in the week to South Stanly with a 3-0 sweep over the 3A East Rowan Mustangs.

Chassity Thomas and Riley Barbee had nine digs each to lead West, while Addie Barbee had 18 of the Colts’ 32 assists.

West Stanly head coach LaRhonda Watkins said West played much better after Tuesday’s loss. She added, “Midway through our season, we are playing well and I hope that the players continue to improve.”