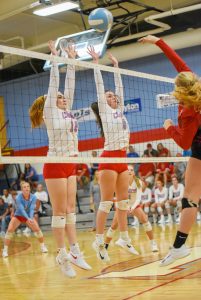 Two teams with undefeated records in Yadkin Valley Conference volleyball games met each other on Thursday night in New London. North Stanly hosted the West Montgomery Warriors with the winner to take the lead in the conference standings.

After the Comets won the first two sets, West Montgomery fought back to win the next two sets. North then took the final set to stay perfect in YVC play with the five-set win over the Warriors.

North jumped out to a 2-0 lead in the first set to force an early timeout by the Warriors. The Comets led by as much as six points before West Montgomery worked back into the set.

Trailing 16-11, West Montgomery outscored North 7-2 to pull into a tie at 18. The Warriors led by two before kills from Tablert and Morris tied the match at 20. The Comets scored the final five points of the set, including two kills by Morris and a tip kill from Lowder to win the opening set by five.

The second set was close for the first part until the Comets went on a run. Leading 11-7, North went on a 7-1 push to build a six-point lead, causing West Montgomery to call timeout.

North finished the set on a 7-1 run with a Lowder kill, giving the Comets the second set by 12 points.

The Comets looked to end the match in the third set with a run. Tied at 12, North went on a 7-1 run and came within one point of winning.

Trailing 24-21, West Montgomery scored the next five points, including three consecutive kills by Yarboro, to win the third set in extra points by two.

Neither team went on a major run in the fourth set, which was close early. North led 15-12 but West Montgomery rallied to tie the set at 20. Talbert’s kill late in the set put North up 23-21, but the Warriors rallied again. A kill by Abbey Alderman and three straight kills from Davenport gave the Warriors the win by two, forcing a deciding fifth set.

North scored six of the first nine points in the fifth, forcing a Warriors timeout. West Montgomery pulled into a 7-7 tie but the Comets ended the set with a 8-2 run. Talbert’s 11th kill of the match on a tip at the net secured the win for the Comets.

“I think we knew we got a little too comfortable at the beginning. (West Montgomery) was putting up a fight,” Talbert said about the team’s rally in the fifth set.

“We have never had anything like this in our volleyball at North Stanly…we want to win conference this year,” Talbert said about the team’s season.

“This win means everything. It’s what we’ve been pushing for. This year, we are trying to ring-chase and be better than we were in the past…we are probably the closest team in Stanly County and we work together well,” Nicole Lowder said. “When the blocking works together we click as a team and it all comes together.”

“Our height definitely helped us. We got over their blocks and that was what we had trouble with all game,” North head coach Kadie Morgan said. “We just started jumping and being more aggressive. I told our girls, ‘I don’t care if you hit it into the net four times, just swing hard.’ ”

The Comets are scheduled to host Gray Stone on Wednesday night and travel to South Davidson on Thursday.