The word “maranatha” only appears once in the Bible, in 1 Corinthians 16:22. It’s a Greek word defined in the new Strong’s Dictionary of Bible words as translating to “Come, Lord!”

In Oakboro, the Maranatha Ministry is a non-profit organization started by Mineral Springs Baptist Church members Reggie and Sherry Hinson. The stated goals of the ministry are to “meet both the spiritual and physical needs of the community.”

To that end, the ministry has opened a free clothing closet in the church’s parsonage across the street from Mineral Springs Baptist on N.C. Highway 205 just south of Oakboro. 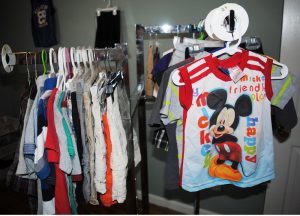 The Marantha Clothing Closet has clothing for people of all ages, including boys and girls’ clothing as well. (Photo by Charles Curcio)

Sherry Hinson said the name for the new part of the ministry came out of the book her husband wrote titled “Maranatha: Our Lord is Coming.” The book is a fictional story of a small-town pastor who receives a vision from God to help the community.

“That made me think about our own small town and how we would be able to help people in our area,” she said.

At first, the ministry helped people with paying utility bills, groceries, medicines and the like. The clothing idea was the next idea for the ministry, she said.

Those in need of clothing can come by and select items for free. Donations are accepted but not required, but Hinson said many end up donating “because they wanted to.”

Beyond men’s and ladies’ clothing, one room has young kids’ clothing for boys and girls. The store also has back-to-school supplies, like book bags, crayons, pens, pencils and three-ring binders.

“Those are all donated,” she noted.

Starting this new outreach of the ministry took a lot of thought and prayer, she said, before starting it.

“We knew it was going to take a lot of time,” she said.

She added once the decision was made, doors started to open for the ministry to make the closet happen. When they were looking for racks to display donated clothing, someone found out about the ministry and donated racks.

The timing of finding things necessary to be able to expand the ministry and help people has shown the Hinsons God has led them there to do this, she said. 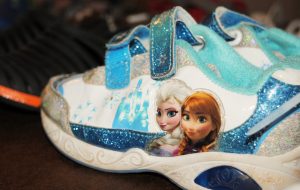 “This is what we are supposed to be doing,” she said. “God gave us a mission to tell people about Jesus. We feel like if we can meet the needs of the community, we’ll be able to talk with them and tell them about Jesus. The more people we educate, the more the word will spread.”

The Hinsons’ oldest granddaughter, Taylor, has chipped in and taken it upon herself to be a part of the new clothing closet.

“She hangs up clothes, goes through new clothes, will do any of it. She looks forward to coming down here. She knows the reason behind what we’re doing,” Hinson said. 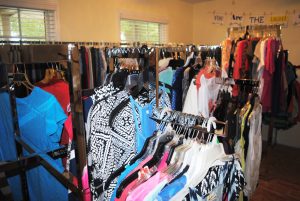 The ministry is always looking for volunteers from the community to help with the closet, possibly to expand its hours of operation. The closet will stay in the parsonage, but one possible long-term goal would be to move closer to downtown Oakboro. Eventually, the ministry wants to also add a food pantry as well.