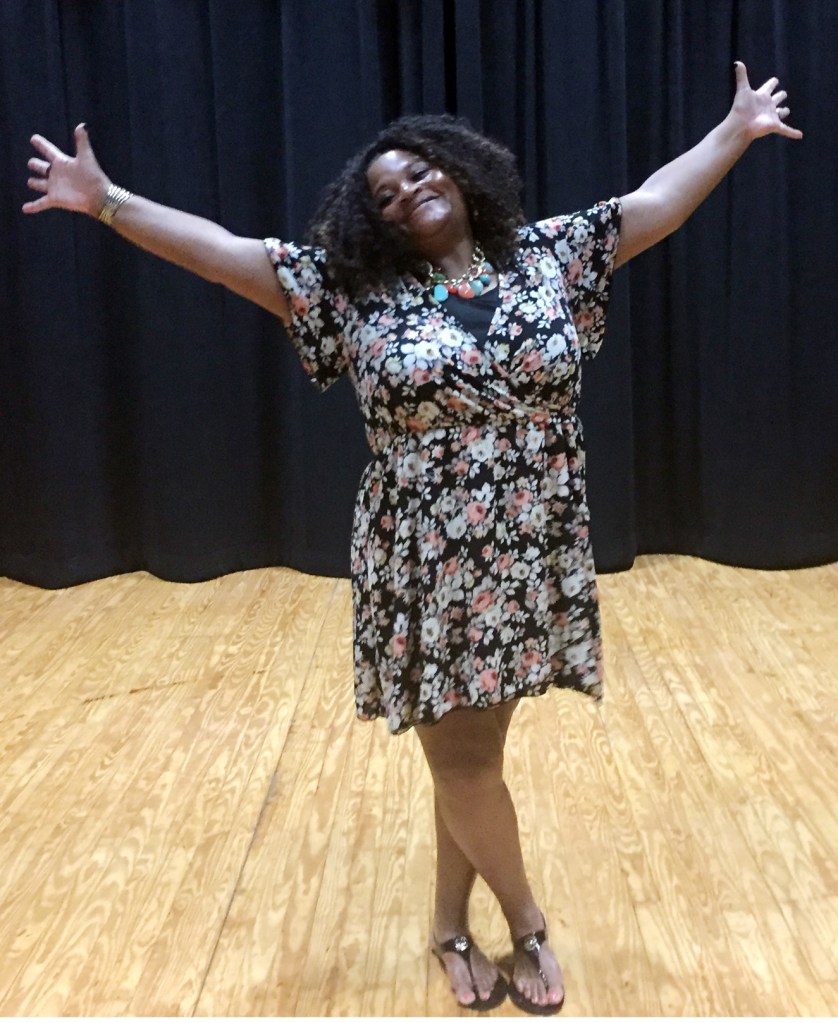 Standing on the new stage of the Central Auditorium, Pastor Sharon Little and her crew, Medicine 2 Da Bonez, will present a gospel comedy show Sept. 22-23. (Photo by Charles Curcio)

The newly renovated Central School Auditorium was done so in hopes of hosting theatrical productions of various kinds.

One of the first shows scheduled to perform at the new venue looks to build on the viewership of a local internet sensation. 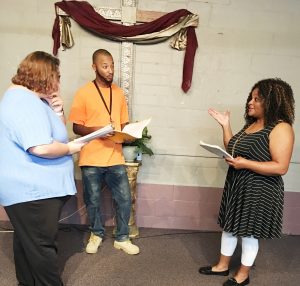 Pastor Sharon Little (right), a.k.a. Jareek Mama, rehearses a scene with her son, Anthony Broadway and Maegan Cox in preparation for the upcoming show at the Central School Auditorium. (Contributed)

Pastor Sharon Little, also known as “Jareek Mama” on Facebook, along with her production crew, Medicine 2 Da Bonez Productions, will present a gospel comedy show titled “Ain’t Nothing Like Family” at 6 p.m. Sept. 22-23.

The series of skits to be performed came largely from Little’s life, including her ministry work with House of Hope Ministries in Norwood.

A completely profanity-free, family-oriented comedy show, Little said she and her crew have performed in various churches and auditoriums. However, she said she always wanted to be able to put on a big show in a venue like Central Auditorium.

“We travel and do (this show); it’s time to take it and put it where a larger crowd can see it,” Little said.

Anyone attending the event “will definitely laugh,” Little said, but within the performance is a message, she added, because of her work as a minister.

“You can get so much joy from laughing,” Little added.

She and her crew will perform from between 1.5 to two hours of various skits with the central theme of people dealing with different situations.

Little’s husband of 15 years, Garfield, works with the crew behind the scenes getting props together. “He is a hard worker,” Little said.

Making a special appearance, though, will be Little’s alter ego. Jareek Mama first was created by her two years ago on Facebook. She posted a video of herself reacting to a fictitious situation of someone else’s son hitting her son, Jareek.

Jareek Mama “deals with reality the way we want to with people in life.”

In one video, Jareek Mama gets a phone call from school saying Jareek was sick with the measles. She tells the lady she does not know about him having measles, instead saying “the family calls his daddy a lil’ weasel.”

When Jareek gets on the phone, which the audience does not hear, his mama asks him what has he done, adding “if you have stolen a measle, you better give it back.”

When she is in public, Little said she gets called “Jareek Mama” more then she hears “Pastor Little.”

Her comedy stylings came largely from tragedy in her life with the death of her mother. Little said she went through a period of depression in which she did not want to hear jokes.

Her father, also a minister, encouraged her to start writing material again, which she did. Following her mother’s death, she was asked to perform a show in Atlanta.

“I found healing though myself laughing. God lifted me out of that place; I loved doing it.”

The general theme of the show coming up, Little said, is “at the end of the day, family is all you have.” The word family is not limited to just one’s biological family, she added. Whether it’s church family, job family or other types, “sometimes you might diss your family but we all need each other…you can’t live with them, can’t live without them.”

She likens her comedy and the character of Jareek Mama to be similar to Tyler Perry’s Madea, but she does not use profanity in her videos or her shows.

“There is nothing (in the shows) to make a Christian or anyone hurt instead of heal,” Little said.

Ultimately, she hopes the performances will bring some families closer together in laughing to “get a reality check.” Maybe, she added, “some can go back and make things right with their family.”