The West Stanly volleyball team bounced back from a five-set loss to South Stanly last week with wins over East Rowan and Forest Hills in consecutive nights. 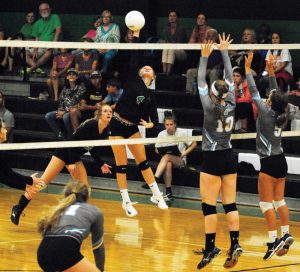 West Stanly’s Alli Sanders (No. 4) goes for a kill in the Colts’ home match monday against Piedmont. (Photo by Charles Curcio)

Addie Barbee led in two stat categories for West (9-4) with four of the team’s nine aces and 17 of the Colts’ 51 digs.

Dani Moss posted a double-double for the Colts with 12 kills and 10 digs. Madison Kee had 10 kills and added two blocks while Riley Barbee also had two kills.

“Right now, the Lady Colts are on a roller coaster with ups and downs.  We are using this week to refocus and focus on the last half of our season,” West head coach LaRhonda Watkins said.
The Colts have three matches next week. West travels to North Stanly Tuesday, hosts East Montgomery on Wednesday and hosts Anson County Thursday.