As part of Thursday’s regularly scheduled meeting of the Locust City Council, members of the council, staff and citizens heard a report from West Stanly fire chief Kenny Crump. 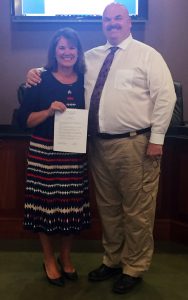 Crump’s report detailed the number of personnel and equipment which stand ready for disasters of any kind. Special attention was noted regarding the department’s preparedness for problems stemming from the arrival of Hurricane Florence.

According to Crump, West Stanly Fire Department is the only fire department in Stanly to have an advanced life support service. Crump said the department has advanced EMTs as well as personnel trained as paramedics. Fire personnel with the advanced training can start IVs and give prescription meds as allowed by the Stanly County medical director.

West Stanly also has the only heavy rescue service staffed 24 hours a day, seven days a week. Included in those rescues are vehicle extrication, grain silo rescue, high angle rescue and swift water rescue. With the threat of flooding from Florence, Crump said “hopefully we won’t need (swift water rescue) but I feel sure we will.”

Along with Albemarle Fire Department, West Stanly FD are the only two Stanly fire departments to be staffed around the clock. From 7 a.m. to 6 p.m. five people are on duty, three at Station 1 on Central Avenue, and two at Station Two in Stanfield. On the other shift, four persons are on duty at Station 1. As of Thursday night, six were on duty in anticipation of problems arising from Florence and would be through at least Monday morning.

The fire department also has a new addition to its list of apparatuses which may be used in case of rising water from the incoming rains — a 14-foot boat with a 30-horsepower engine which just arrived Wednesday. Crump said members of the department trained in Badin Lake with the boat for events like what was scheduled to arrive this weekend.

West Stanly FD also has an enclosed trailer which can serve as a mobile command center for land search operations or for other enhanced rescues such as swift water. The department is the only one in Stanly with swift water rescue certification by North Carolina Rescue and EMS.

“We are proud of the service we provide … our people are highly trained and dedicated,” Crump said, adding Rocky River “provides us a lot of problems” in terms of potential swift water problems.

In his administrator’s report to the council, City Administrator Cesar Correa said he met earlier this week with Crump and Police Chief Frank Hartsell regarding plans for potential problems this weekend from Florence.

Correa noted it was almost exactly a year ago when the departments got together to prepare for another hurricane, Caroline. He encouraged people to stay inside and “do not leave the house unless you absolutely have to.”

Because of Florence’s turn toward South Carolina, Correa said, western Stanly may not get affected as much, but he said he expected “substantial rains and heavy winds.” He added the biggest issues he felt the city faced would be downed trees and power outages. Staff members have worked to make sure emergency generators are fueled at the various waste water stations.

Any closure or other pertinent information regarding safety issues in Locust and the area would be posted on the city’s website and Facebook pages.

One event which was cancelled was the finale of the Locust Summer Concert Series on Saturday which was to include fireworks. The event was postponed to Sept. 28.

In other actions, the Council:

The next meeting of the Locust Town Council will be at 7 p.m. Oct. 11 at the Joel Huneycutt Community Room adjacent to city hall.