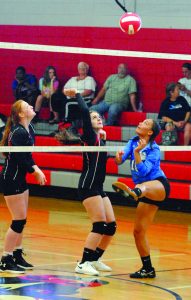 South Stanly’s Emma Lemmons, left, and AlbemarleÕs Krystin McLendon goes for a 50-50 ball at the net in the recent matchup. The Bulls won over the Bulldogs in straight sets. (Photo by Charles Curcio)

On Sept. 12, the South Stanly volleyball team hosted Albemarle in a Yadkin Valley Conference matchup. The Bulls swept the Bulldogs in straight sets with scores of 25-5, 25-15 and 25-11.

Morgan Kinley had seven of the Bulls’ 19 aces in the game while Adison Campbell paced South with nine digs and added nine assists. Keeli Crisco drove the Bulls’ offense with a team-high 14 assists.

Albemarle is scheduled to play Thursday at North Stanly.