An osprey is a bird of prey which often lives in the western part of North America whose primary source of food is fish.

The Arizona Diamondbacks’ affiliate in the advanced rookie short-season Pioneer League, located in Missoula, Montana, has the osprey as a mascot. One Osprey feasted on opposing pitchers instead of fish in earning top honors for the team. 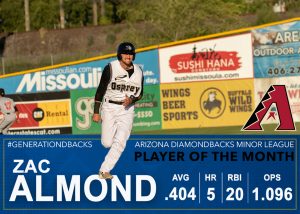 A graphic by the Arizona Diamondbacks farm organization displays Zach’s numbers for Player of the Month in August. (Contributed)

Almond played 56 games in the Pioneer League at both catcher and first base, finishing with a .345 batting average (fifth in the league) and a slugging percentage of .594 (second). He was fourth in the league in OPS (on-base plus slugging) with a .979 percentage. He knocked out 14 home runs, second behind teammate Zack Shannon who led the league with 15. Almond also drove in 53 runs, tied for sixth overall.

He was named the Minor League Player of the Month by the Diamondbacks as an organization for his efforts in August. He hit safely in 20 games, with 12 multi-hit nights, including a two-homer, three-RBI night Aug. 22.

Almond was also named to the league’s All-Star team and competed in the Pioneer/Northwest All-Star Game. He went 1-for-2 with a single and a run scored as the Pioneer League won 13-10.

After putting up huge numbers with Missoula, he was called up to the Hilltop Hops of the Northwest League, a Class A Short Season team. He had one at-bat in the Hops’ second of a three-game playoff series, a 3-2 loss to the Eugene Emeralds.

Overall, Almond’s numbers were much stronger from 2017 when he was injured. He played 19 games that season on the Diamondbacks’ Arizona League team, hitting .260 with a .300 slugging percentage.

Almond said he credits former major leaguer Jonny Gomes, the hitting coach for the D-Backs in the Arizona League, with helping him improve at the plate. The two worked together in extended spring training this year in Scottsdale. Gomes played for eight major league baseball teams, starting with six seasons in Tampa Bay from 2003-2008.

Early in their work together, Gomes said to Almond he knew the former Comet could catch and play behind the plate but that they had to figure out his bat.

“He took me under his wing. It wasn’t my swing,” Almond said.

He added Gomes helped him more about timing and getting to the ball, developing a better approach to hitting.

Toward the end of extended spring training, Almond said, he began hitting the ball better. Gomes gave him a phrase to think about while at the plate: “Stay hungry, be dangerous.”

“It was more about confidence, about knowing I could actually hit,” Almond said of his work with Gomes.

Some of the things the two worked on were on the physical side, Almond said. Gomes helped Almond to shorten his swing while not dropping his shoulder.

His coaches with the Osprey also helped him work on swing mechanics and being better in getting his hands to the ball.

Watching his own stats was not a big deal during the season, Almond said, but at the end he realized he never had a week-long slump without a hit. He might only get one hit in three games of a four-game series, but would get multiple hits in the fourth game.

“I knew what I was doing was very hard. I took what Johnny said and thought, ‘I can do this; I’ve done it my whole life.’ I knew I could do it, just go out every day and have fun,” Almond said.

He texted Gomes three days before his two-homer night, to which Gomes replied he was doing pretty well.

Coming from a place where outdoor activities are everywhere, Almond said, helped him transition from Stanly County to Missoula. The city is estimated to have a population of around 73,340 as of last year, which is over 10,000 more residents than Stanly.

Despite the similarities in the surrounding wilderness, Almond said it was tough at times living and playing for the Osprey. Players in the Pioneer League have to find their own apartments, which he only had three days to do before the season began.

He also did not have a way to get to the field, until discovering his roommate had a truck.

Playing in Missoula did not mean a lot in terms of income, either, Almond said. Calculating the number of hours per week worked for the weekly pay, he said he was making about $2-3 per hour.

“Minor league pay is hardly anything; people don’t realize that,” Almond said. “It’s a lot of work and time.”

The minor league life has a lot of ups and downs playing on ballfields which are not the best as well, but there were some bright spots off the field.

Almond said he enjoyed the outdoor sports life of Montana. He and two teammates fished nearly every day they had the chance. The three teammates have also planned some hunting trips for the offseason.

One thing Almond avoided in 2018 was a serious injury, which made the 2017 season a challenge. The only injury he had was a groin injury which kept him out of the lineup for three days.

Conventional wisdom in baseball says if a player misses five or less days in a short season, that’s considered a healthy year, according to Almond.

Missoula had two first basemen injured in the season, calling him into duty at the first sack when not catching. He played about 20 games in a row at first base in the campaign.

Behind the plate, Almond caught three games in a row of the hot summer season, which ran from June 15 to the first week in September.

Record wise, the Osprey finished the season 39-36 overall, having finished in second place in both the first and second halves of the season.

Almond said playing in the 75-game short season was about what he expected, adding he was a little disappointed he did not get to play a full-length schedule.

“I made the best of what I could do. I knew it was a grind and tried to take advantage of the opportunity. I’m using every resource to try to make it to the big leagues, to make everyone in Stanly proud,” Almond said.

Getting to The Show

Along with other factors in his career, Almond said two things in particular have helped him get to where he is.

One of those was playing for the Stanly County Post 76 American Legion baseball program. He said he wanted people to see someone who had success in the pro ranks get his training from Legion baseball.

“Legion baseball, in my opinion, prepares you better for college,” Almond said in terms of playing just about every day for a short season.

“I don’t put pressure on myself for it, but deep down I would like to make it for myself, my family and my community,” Almond said.

The other person he mentioned was Catawba head coach Jim Gantt, whom he called “one of a kind in a good way.” Gantt’s old school, straight-forward approach to the game had a profound impact on his career.

“If you don’t play the right way, he’ll take you out,” Almond said.

A prime example came in Almond’s sophomore year when Catawba was hosting Pfeiffer. The Indians were up about six or seven runs in the third inning and he was on second base. Teammate Jake Kimball hit a shot off the wall for an apparent double. Believing he would score easily, he started jogging around third and heading home. Before he could cross the plate, Kimball was thrown out at second base, meaning the run did not score. Gantt immediately took Almond out of the game.

“That day kicked into me, you can’t do that. It could hinder your career. It’s one of the stupidest things I’ve ever done, not run. I’ve never done it again,” Almond said.

Gantt “teaches more about life then baseball; he’s more worried about making you a man. He still wants to win ball games and championships, but the way he coaches is one in a million.”

The baseball season may be over in terms of games but the year is not quite over for Almond.

In two weeks, he reports to the Diamondbacks spring training facility for the Arizona Instructional League.

Next March, Almond will report to spring training, where he hopes to eventually play Class A ball for either Kane County (Illinois) or Advanced-A ball in Visalia, California.

The dream will continue for him to be able to continue to represent Stanly County in the pro ranks, Almond said.

“Growing up, I dreamed of playing pro ball, knowing I come from a small community which has not always had a lot of pro athletes,” Almond said. “I would like to be able to make it there to say someone from our county has made it, represent our baseball.”

Baseball has taken a lot of time in his life, and will likely continue even past his playing days when he hopes to coach at some level of high school or college baseball.

“I want to help others try to reach the same goal I have,” Almond said.

After his time at the instructional camp, Almond plans to have a youth baseball camp at his alma mater of North Stanly, possibly in November.

The name of the camp?

“Big League Dreams,” he said. “I want to tell all the kids out there to dream big.”