Siblings from across the pond find each other after 55 years 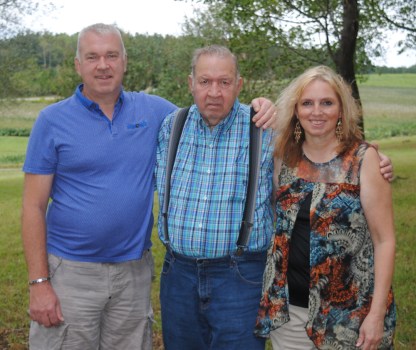 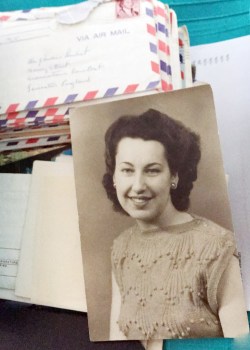 Pauline Dobson is shown with correspondence from Lambert. 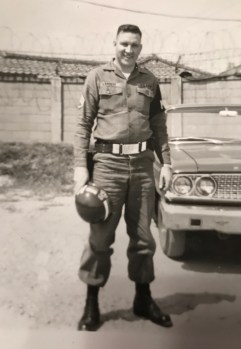 Melvin Lambert served as an MP in Korea, Vietnam and Europe.

Before the internet, the business of reuniting family members long separated by adoptions, history or other reasons was an arduous process. Often, finding relatives meant combing through dusty old record books located in the basements of courthouses or newspaper archives.

With the advent of genealogical websites as a cyber business, more and more long distances can be crossed as people find their long-lost relatives.

Such was the case of Albemarle native Tammie Hudson, who in March was contacted by her half-brother, Vincent Dobson. The internet also provided their first contact because the two were separated by the Atlantic Ocean; Dobson was born and lives in Leicester, England.

The two families celebrated together over the last few days as the Dobsons made the long flight from the U.K. to the U.S. to meet for the first time.

Tammie’s father, Melvin Lambert, and Vincent’s mother, Pauline Dobson, met in Stuttgart, Germany, around 1962 or 1963. Lambert was serving with the U.S. Army as a military policeman while Dobson was a civilian clerk in the administration department.

Both grew up as only children with their respective parents, not having any full siblings of their own. Vincent Dobson and his mother lived with his grandparents who had retired, allowing his mother work.

“I had to send two Mother’s Day cards,” Dobson said. “My grandfather was my father figure; he died when I was 18.”

Finally, he decided to use ancestry.com’s DNA testing services, providing a saliva sample in order to help fulfill his dream of finding his father.

“There were a lot of Mel Lamberts in the Carolinas,” Dobson said. “I thought the only way to get to the bottom of this was through (the website). I’ll do a DNA test; if nothing comes out of it, at least I’ll have an interesting look at my heritage.”

Dobson did not tell his wife, Anne, or his daughter, Georgia, he was doing the DNA test, wanting to see the results first.

He had known about his father for most of his life. He was born in 1963. His mother kept all of her correspondence with Lambert through the years.

Finally, after getting a high score for one person’s email address, he told his family about his search online.

Not even knowing her name yet, just having the address, Dobson introduced himself to Hudson, hoping to not make her feel frightened, he said. After sending her a photo of himself, Dobson asked if this particular Melvin Lambert had a daughter named Tammie.

She immediately emailed back saying she was Tammie.

“You could feel the silence in the messages between them,” Anne said of the realization that the two people from so far away were half-siblings.

Unbeknownst to the Dobsons at the time, Hudson was already a genealogy buff of her own. She has been a member of several genealogy organizations, including the  Stanly County Genealogical Society, Olde Mecklenburg Society, Anson County Historical Association and Southside Virginia Genealogical Association. She also is the administrator of the Stanly and Montgomery county genealogy page and DNA group for Stanly and Montgomery counties pages on Facebook. Hudson is also a genealogy blogger.

Hudson, also a member of the Yadkin River Patriots chapter of the Daughters of the American Revolution, had been tracing her own family tree since she was 14. She followed in the footsteps of her father and paternal grandfather in tracing the family’s roots.

“I never knew I had a brother,” Hudson said, adding she had done the same DNA test on ancestry.com about four or five years ago. “What’s really strange is it seemed everyone I was related to was on my dad’s side.”

Included on that side were a number of members of the Burris family, which ranged in location from Texas to California to Alaska. Most of the matches which came up were in the second or third cousin range.

However, upon checking this year, one match came up high on the score the site gives in terms of the closeness of a match. That match turned out to be in the close family to first cousin category: Vincent Dobson.

Hudson, who has four children, said her youngest child, who had just left the military, found Dobson’s Facebook and Twitter pages, sending his mother a picture.

“When I saw the Facebook picture, I said, ‘Forget about it. No need to do any more (research),’ ” Hudson said of the similarities between Dobson and her father.

When she was 7, her mother remarried and eventually had two half-brothers, but both were diagnosed with autism and stayed in group homes. She was unable to have a relationship with either, never having a brother she could talk to, she said.

Getting To Know Each Other

The two siblings were actually born just days apart in the same month. Hudson, now 58, is three years older than Dobson, 55. Both also shared a common place of birth in that borth were also born on military bases.

Beyond the two siblings getting to meet, the recent reunion allowed Hudson to meet her niece while Georgia Dobson had the chance to meet the grandfather she had never known. She said for much of her life, the most family she knew was on her mother’s side.

Despite the distances between the two families in terms of home, Dobson said “it doesn’t feel far away. These guys have been so welcoming, so accommodating and accepting. It’s been wonderful.”

Georgia said her father has a lot of American in him despite living his life across the ocean. She noted his taste in food and sense of humor are more American then British.

Both are also in management positions. Dobson is an industrial engineer while Hudson has been a retail manager for several local businesses, including Roses in Lexington and the Albemarle Blockbuster Video. She is the manager of the Dollar Tree store in Albemarle.

More contact will be in the future for both families, both agreed, more chances to grow even closer.

In February, Hudson will fly to England to have a joint birthday celebration with Dobson and his family.

“I’ve never been out of America,” Hudson said.

The family all agreed one word was the most positive thing to come out of the whole experience: love.

“It happened that quickly; we had that connections,” Dobson said.

Added his half-sister, “I’m very glad we found him.”