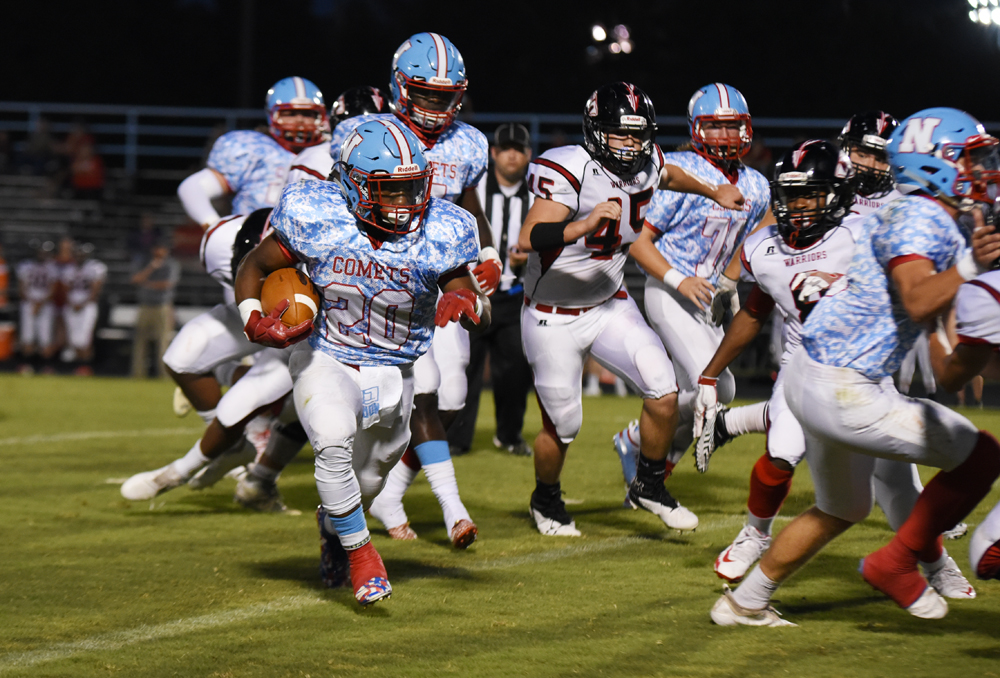 North Stanly running back Cameron Davis looks for room to the outside, scoring the first of his three touchdowns in FridayÕs win over West Montgomery. (Photo by Dawn Lucas)

Somewhere late in the first half of Friday’s home game for the North Stanly Comets, a helicopter circled the football stadium and landed over on the baseball field. University of North Carolina head football coach Larry Fedora stepped out of the chopper to catch the second half of the Comets’ game with the West Montgomery Warriors.

Already leading 28-0 at halftime, the Comets continued to dominate the Warriors on both sides of the football in a 51-6 rout.

The win for North Stanly (3-2, 1-0) opened Yadkin Valley Conference play this season and was the biggest margin of victory for the Comets ever in a win over West Montgomery (1-5, 0-1), 45 points. It was also the biggest margin of victory by any Stanly team over West Montgomery since Albemarle won 47-0 over the Warriors in 2004. 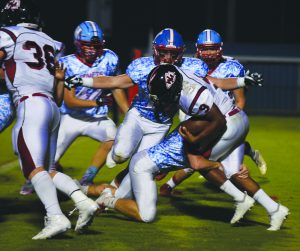 Taking on former Albemarle head coach Danny Akins, now in charge of the Warriors, the Comets’ defense limited West Montgomery to -5 net yards of offense in the first three quarters. Quarterback Chase Chappell was sacked and tackled for a loss several times in the game. The visitors put the ball on the ground three times but never lost possession of the ball from a turnover.

The Warriors had 12 drives in the game, punting seven times. Two of those punts were returned for touchdowns, one from former West Montgomery standout DJ Rhone and the other from Cooper Hogan on a shanked attempt in the third quarter. The Comets also added a safety on a bad snap on a Warriors punt attempt. Wes Reynolds tackled the West Montgomery punter in the end zone for the safety.

West Montgomery’s final drive of the game broke the shutout bid by the Comets. Daquarius Cuthrell broke free around the left side of the offensive line for a 44-yard touchdown in the final 90 seconds of the game.

North Stanly’s offense was efficient in putting points up on the board. The Comets scored on three straight drives in the first quarter, getting touchdown runs from Cameron Davis and Rhone. Davis finished with 122 yards on only six carries, three of which were touchdowns. He averaged 20.3 yards per carry. Rhone finished with 41 yards on four carries.

As a team, North Stanly had 170 net yards on 17 attempts, while adding one completed pass, a 26-yard toss from Bailey Baker to Rhone early in a 23-point third quarter.

The only turnover of the game was committed by the Comets late in the first quarter when Baker fumbled and Jaleel Leake recovered for West Montgomery.

Addison Cord’s streak of made points after touchdowns came to an end with an early miss, but Cord converted the next five in a row for North Stanly.

Rhone said after the game playing with North Stanly has been great, adding “everyone has my back. I love everybody here.” He also said he and the Comets have high expectations for the season. To reach those goals, North “works hard every day in practice.”

Davis said “when the offensive line blocks great, runs happen.” He added the win felt good “but we have to keep it going throughout the season.”

North head coach Scott Crisco said coming off a tough non-conference schedule to open with a win like Friday’s in YVC play is “good to make a statement early. That’s what we wanted to do…we were clicking tonight.”

Crisco added he felt his team’s chances in conference play are good if the Comets continue to play as well as they did in Friday’s win.

North goes on the road Friday to face Chatham Central (0-4). The Bears were scheduled to play Albemarle on Saturday at 7 p.m. in Bear Creek.