Having surpassed the midway point of the Yadkin Valley Conference regular-season schedule, the South Stanly Rebel Bulls volleyball team took to its home court Thursday hosting Gray Stone. The Bulls needed a win to stay two games out of first place and one out of second. 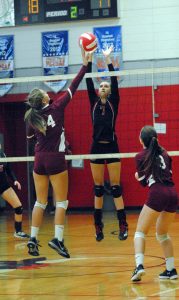 South Stanly’s Sidney McSwain goes for the solo block on a Gray Stone player during the second set of Thursday’s five-set match. (Photo by Charles Curcio)

The Knights’ entered Thursday’s match sitting in the middle of the YVC standings in fifth place, a game behind Uwharrie Charter.

The two teams battled back and forth, trading sets until a late serving run by one of South’s standouts lifted the hosts to a five-set win.

For the Knights, Mattie Burris led the way with 16 kills and four blocks while Christen Clontz and Karlie Griffin each had 14 kills. Griffin added nine digs and Madison Hatley had 43 assists.

The set was tied three additional times in the final moments, at 17, 19 and 21, until South got kills from McSwain and Hinson to win the first set by three points.

Serving from Gray Stone helped the Knights build an early lead in the second set. Aces from Christen Clontz early were part of a 7-3 run for the visitors.

The Bulls got within a single point midway through the set then eventually tied the set, 19-19, on a Hinson kill. South led 22-20 on an Adison Campbell ace but the Knights got kills from 12 and 24 scoring five of the last seven points to even the match, 1-1.

South bounced back in the third set with a 6-2 run, getting kills from McSwain and Hinson off of Gray Stone blocks. Karlie Griffin got the Knights within three points with a kill, 9-6, but South continued to widen the lead. Kills by Emma Lemmons and McSwain put the Bulls up 16-10.

Gray Stone called a timeout down 20-15 but got no closer than five points, with the Bulls eventually winning by seven points after a Knights’ kill attempt went long. 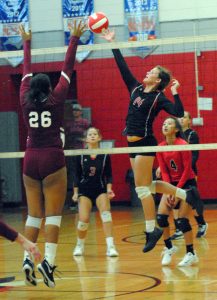 South Stanly’s Mattie Hinson goes for a tip over a Gray Stone blocker in Thursday’s match. (Photo by Charles Curcio)

After a slight delay to start the fourth set, Gray Stone grabbed the momentum immediately, scoring 13 of the first 14 points in the set and forcing South to call both timeouts in the run. The Knights forced a deciding fifth set, winning the fourth by 13 points.

In the final set, the teams split the first six points before a Burris tip helped the Knights build a 7-4 lead, forcing a South timeout.

The Bulls scored the next two points in a row, with the Knights calling timeout. With Hinson serving, South rallied past Gray Stone to retake the lead with a 6-0 run including an ace.

Leading 13-10, a long point went to South when Faulkner’s kill attempt was mishandled by the Knights. Faulkner then served an ace to clinch the match.

The Bulls coach said the win “definitely puts us in control of our own destiny. Had we lost, it would have made (winning) a conference title difficult.”