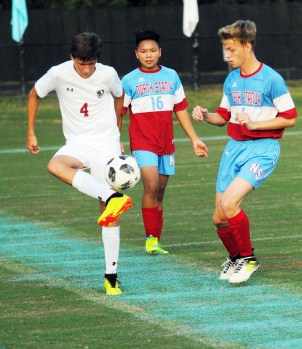 Gray Stone midfielder Andrew Beohler clears the ball down the sideline from North Stanly's Edison Kahn, middle, and Alex Huneycutt in the first half of Monday's match. (Photo by Charles Curcio) 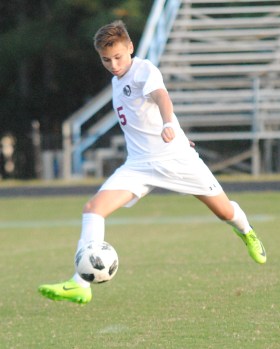 Eric Strohecker got the Knights on the board early in the second half with a long-distance goal. (Photo by Charles Curcio)

A physical contest between the two teams saw the Knights break through for three second-half goals in a 3-1 win over the Comets.

Gray Stone had several chances in the first half but Comets keeper Addison Cord made several saves. The Knights had a chance with 17:30 left in the first half stopped with a diving save by Cord. The North senior also made saves a minute later and two back to back in the final four minutes to preserve a scoreless tie.

The Knights’ Levi Rosser also stopped a couple of North chances in the first half including a breakaway by the Comets’ Bryson Childress.

Erich Strohecker broke a scoreless game 1:49 into the second half by launching a long shot from the visitor’s side of R.N. Jeffery Stadium. The sophomore’s long shot hit the upper right corner of the net past Cord.

The offensive chances continued for Gray Stone as Chase Viscomi fired just wide in the 49th minute. Three minutes later, a rebound off a Cord save was served high over an empty net.

Finally, in the 65th minute, Zack Norman found the back of the net to put the Knights up by two goals.

Andrew Beohler added a goal with 10:45 left in the game for Gray Stone. He got possession of the ball from the North defense behind Cord and fired into the empty net to put the Knights up 3-0.

The Comets nearly scored in the 75th minute when Childress was fouled in the penalty box and awarded a penalty kick. He went top shelf but Rosser punched the ball over the crossbar for the save.

On the ensuing corner kick, North ended the shutout bid for Rosser when Lowder scored with 5:15 remaining in the second half.

“You have to give Addison credit. He’s a good goalie. He made some good saves in the first half. I thought we controlled most of the first half; we just couldn’t put it in the back of the net,” Gray Stone head coach Brad Harrington said. “To get that one early in the second half… really built us momentum and got us off that tie we wanted to get away from, putting energy into our guys.”

Regarding the physical nature of the game, Harrington said “we preached in practice it was going to be a physical game, just don’t retaliate. We have to play the way we can and get the ball off our foot.”

Gray Stone gets the rematch with first-place North Moore (7-1, 4-0) on Wednesday night.