The West Stanly volleyball team got back to conference play in the team’s last three matches, all wins for the Colts. 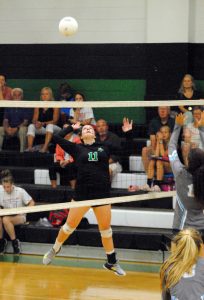 West’s Raelee Furr goes for a kill in a recent home game. (Photo by Charles Curcio)

Madison Kee had 10 kills to lead West while Dani Moss, Ali Sanders and Kayli Cleaver each added six kills. As a team, the Colts had 24 kills overall.

Addie Barbee led West with 11 of the team’s 23 digs and Moss had nine of West’s 20 aces, with Raelee Furr adding four aces. Furr also had two blocks along with Cleaver.

One night after the Colts’ win over East Montgomery, the Anson Bearcats came to Red Cross and a suffered a similar fate as the Eagles had, losing in straight sets.

Cleaver led the way with 12 kills while Moss and Furr each added nine of West’s 43 kills. Caylee Clayton had 15 of the Colts 31 digs while Addie Barbee had three aces. Furr added five blocks and Kee had four blocks.

“Tonight the players came together against a tough Bearcats team. They worked together and never gave up. If we can keep our injuries to a minimum to finish the season, we may place OK,” West head coach LaRhonda Watkins said.

The Colts improved to 12-4 overall and 4-0 in Rocky River Conference play with a 3-1 road win Monday at Central Academy.

Caylee Clayton had 25 of West’s 54 digs while Dani Moss added four of the Colts’ 12 aces.