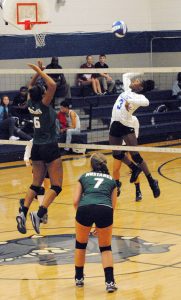 Trailing 5-2 in the second set, back-to-back kills from Ayanna Ridenhour pulled the Bulldogs to within a point. The Mustangs then went on a 9-0 run to lead 14-4. Albemarle answered with a 7-0 run to pull within three points, forcing the Mustangs to call timeout.

North Moore continued to maintain the lead for the rest of the second set. Back-to-back aces from Alexus McCrimmon gave the Mustangs the win in the set by six points.

The Bulldogs had early leads in the third set as the score was tied several times in the early points. Two aces from Chloe Brown put the Mustangs up 12-7. North Moore maintained a lead between four and six points the rest of the way. McCrimmon ended the game with a cross-court kill.