A 17-year-old North Stanly High School student was arrested Thursday for making threats against his former football teammates and the school, according to the Stanly County Sheriff’s Office. 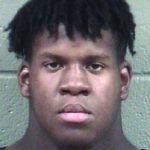 Javon Davis, of New London, was arrested Thursday afternoon without incident and placed in the Stanly County Jail under a $5,000 bond.

Sheriff George T. Burris said his office was alerted of an online post on Instagram making threats toward North Stanly High. It comes a day after Davis was kicked off the school’s football team, Burris said.

A senior, Davis was a tackle on the team.

“Our SRO took screen shots of the Instagram post,” Burris said. “We sent several deputies up there [to North Stanly] to make sure everything went smooth while we obtained a warrant.”

Burris said Stanly County Schools Superintendent Jeff James was alerted of the situation and “worked great with us on this.”

The sheriff stressed for students who have threats made against them to alert school officials and law enforcement.

“I don’t want anyone to be bullied or threatened,” Burris said. “We want to look after them and keep them safe. … We take these [threats] very seriously and so does our superintendent.”

James said since this was a student matter, the school system would not comment further.