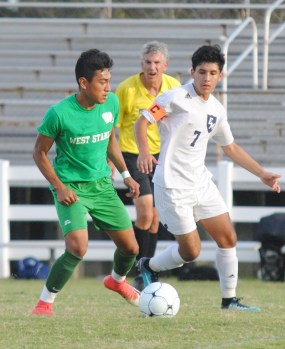 West's Aldo Cruz battles for possession of the ball in the middle of the field with East Montgomery's Belen Jaimes in the first half of Wednesday's match. 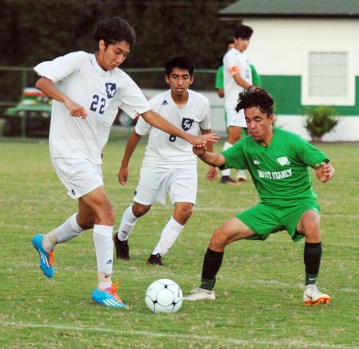 On Wednesday night, the West Stanly soccer team hosted East Montgomery in a Rocky River Conference matchup. The Colts had returned to conference play Monday with a 4-3 overtime loss to Central Academy.

With storm clouds in the sky, West jumped out to an early lead only to see a three-goal run by the Eagles lead to a 4-2 loss.

West Stanly (5-5-1, 1-2 RRC) avoided a few early chances by East Montgomery (5-3-1, 2-1) while generating a couple of scoring opportunities as well, none of which came to fruition.

A mistake by the Eagles’ keeper, punting the ball while just out of the penalty box, set up a direct kick just outside the box for West in the 19th minute. Aldo Cruz took the shot on goal, which was stopped, but the rebound found its way to Caleb Feree who buried the ball in the net, putting the Colts up 1-0.

East Montgomery nearly tied the match in the 22nd minute but Leo Gonzalaz’s shot off a rebound into the net went just high.

The Eagles finally broke through with 5:17 left on the clock when Armondo Avilez-Perez tied the match with a goal.

With the match still tied 1-1 early in the second half, the first of two yellow cards was issued against East Montgomery when Andres Mirelas was whistled for grabbing the jersey of a West player for the second time on the night.

Hector Lopez put the Eagles up in the 48th minute with a goal. He corralled a long clearance, then his shot went off a Colts defender into the net to put East Montgomery up 2-1.

East Montgomery added what proved to be a key insurance goal in the 62nd minute from Ismael Salazear.

Trailing by two goals, Cruz gave the Colts new life in the 70th minute when his low shot hit the inside of the left post and rolled into the back of the net for a goal.

West had a golden opportunity to score with the goalie down in the final two minutes but the Colts could not get a shot off.

The Colts also had a chance on a free kick in the final 30 seconds after a second yellow card was given to the Eagles. West moved its goalie up in the field, but the Eagles cleared the kick away and then Salazear rolled a long shot into the empty net for the game’s final score.