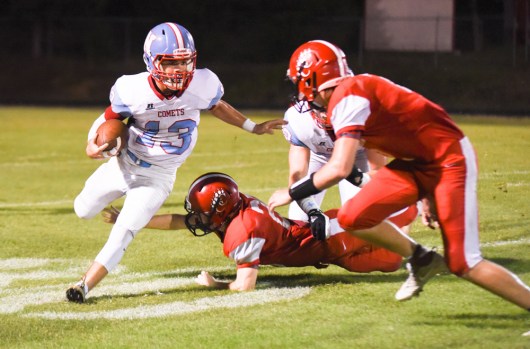 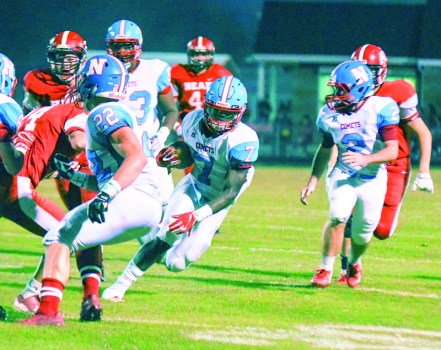 D.J. Rhone (No. 7) had a rushing touchdowns and 72 yards on two carries in the Comets' 66-0 win at Chatham Central Friday. (Photo by Dawn Lucas) 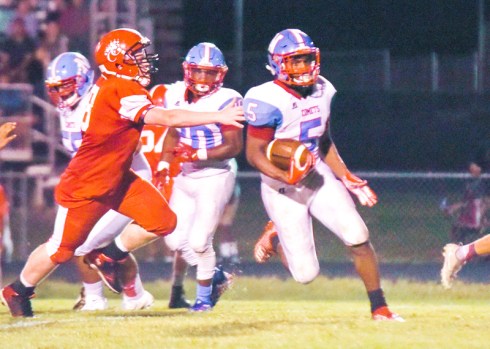 Scott Crisco took over as the North Stanly head football coach in the 2015 season. Since that season, the Comets had posted six defensive shutouts.

Included in those results was one team the Comets have dominated in the season series, the Chatham Central Bears. The Comet were 9-0 lifetime heading into Friday’s game in Bear Creek.

North added another similar chapter on Friday with a 66-0 blowout win over the Bears.

The Comets’ defense dominated Chatham Central (0-6, 0-2 YVC) allowing 58 total yards of offense in the game. Chatham’s Michael Moore and Logan Staley were a combined 4-of-15 for 18 yards, including one interception thrown to North’s Cooper Hogan. North Stanly (4-2, 2-0) recorded four sacks in the game, two from Kevon McRae along with individual sacks from Wes Reynolds and Carter Terry.

Cameron Davis crept closer to the school’s rushing touchdown record, scoring twice on the ground for North Stanly.  He now has 78 career touchdowns on the ground, three short of Antonio Williams’ record of 81. Davis also finished with 108 yards on six carries, his fourth 100-yard rushing game of the season.

On the ground, the Comets put up big numbers. On 19 carries, North rushed for 367 yards, averaging 19.3 yards per carry. Christian Barber added 73 yards on four carries with two touchdowns, while senior D.J. Rhone had 72 yards on two carries including a 64-yard touchdown run. Rhone also added an 87-yard kickoff return for a score, while Garrett Clark and L.J. Rush also had rushing touchdowns.

On special teams, Addison Cord had 10 touchbacks on 11 kickoffs and was 9-for-9 on extra points while also kicking a 35-yard field goal.