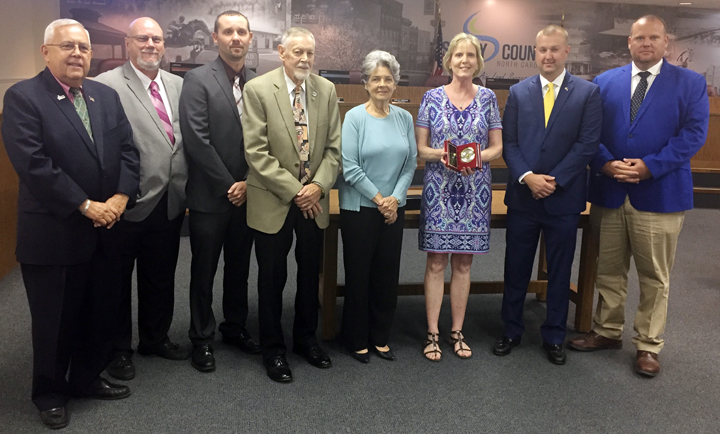 Representatives of the Endy Volunteer Fire Department made their appeal to the Stanly County Board of Commissioners in Monday’s meeting to replace equipment and lower its fire insurance rating.

To that end, Endy VFD president of the board of directors Cliff Robinson and Fire Chief Daniel Poplin made their case to the board to increase the fire tax. Currently at 6 cents per $100, the Endy representatives asked for an increase to 10 cents.

Robinson said he, Poplin and others looked to lower Endy’s insurance rating from nine to seven. In February, after the department’s audit, which Robinson called “impeccable,” advice was given to them on improving the rating.

“With these kind of records, have a little more training and equipment, I can easily see you going to a seven or even a five…we are two years into the training session,” Robinson said.

Assistant Chief Brian Collins, along with Poplin and Robinson, sat down to try and find ways to improve the fire department’s equipment.

“We knew we weren’t going to buy fire equipment with what our current fire tax rate,” Robinson said. He added Endy has the second lowest rate in the county next to Oakboro, but Oakboro “has a Fourth of July weekend that generates six figures in income.”

Many of the other fire tax rates are already at 10 cents per $100, with Southside being the exception at 12 cents.

Robinson then went to Shelton Insurance to get figures on what homeowners would be saving if the fire rating went from nine to seven. The figures he presented to the board stated the savings would be around $40-50 per month for homes around $150,000 in value, to $80-90 for a $300,000 home.

The increase in fire tax would generate an annual increase of approximately $83,000, which Robinson said would be applied into a plan to replace equipment on a five-year rotating basis. The additional funds would also be used to pay off the building, an amount he estimated at $287,000.

Commissioner Bill Lawhon asked how many property owners are in the Endy community, to which the fire chief responded the population is approximately 3,400 to 3,450.

Robinson also stated a community meeting conducted recently at the Endy fire building did not have any residents who presented a dissenting opinion to the increase.

On Monday, the Board also passed a zoning request for a 1.7-acre tract owned by Joseph A. Hatley at 24897 South U.S. Highway 52 Business, from Neighborhood Bsuiness to M1 (light industrial).

The request was for a company which produces insulation products used in large buildings. The business does a small amount of manufacturing which “can be operated in a relatively clean and quiet manner and which will not be obnoxious to adjacent residential and business disctricts,” according to CEO Peter Horwath in a memo from planning director Michael Sandy to the commissioners.

Commissioner Bill Lawhon made the motion, seconded by vice chairman Gene McIntyre, and the board approved the request unanimously.

In two other zoning requests, Stony Gap Properties asked for two pieces of land just off N.C. Highways 24-27-73 and Stony Gap Road be rezoned from residential agricultural to general business. The two properties, both in growth areas of the land use plan, are owned by Joel Mauldin II and Dr. Laura Mauldin.

A 5.24-acre tract has been slated by the Mauldins to build a new convenience store and restaurant modeled around the Sewee Outpost in Awendaw, South Carolina. Board members were provided pictures of the existing store. Commissioner Scott Efird made the motion, seconded by Commissioner Ashley Morgan, and the motion passed 7-0.

The other property, a 34.12-acre tract on the northeast corner of Dunlap Road, was changed to allow the building of a boat and camper storage facility and possible mini storage warehouses in the future. Lawhon made the motion, seconded by Morgan, and the request passed unanimously.

Changes to the Flood Damage Prevention Ordinance were also passed by the Board of Commissioners. Sandy’s memo to the board stated the ordinance “require that uses vulnerable to floods be protected against flood damage at the time of initial construction.” The changes also included language to “control the alteration of natural floodplains, stream channels and natural protective” and “control filling, grading, dredging, and all other development that may increase erosion or flood damage.”

Also, with being part of the National Flood Insurance Program, the ordinance had to have certain additional objectives. Those include minimizing public expenditure for flood control projects and “the need for rescue and relief efforts associated with flooding,” “minimize damage to private and public property” and “maintain the natural and beneficial functions of floodplains.”

Morgan made the motion, seconded by McIntyre, and the motion passed 7-0.

The Board of Commissioners also: