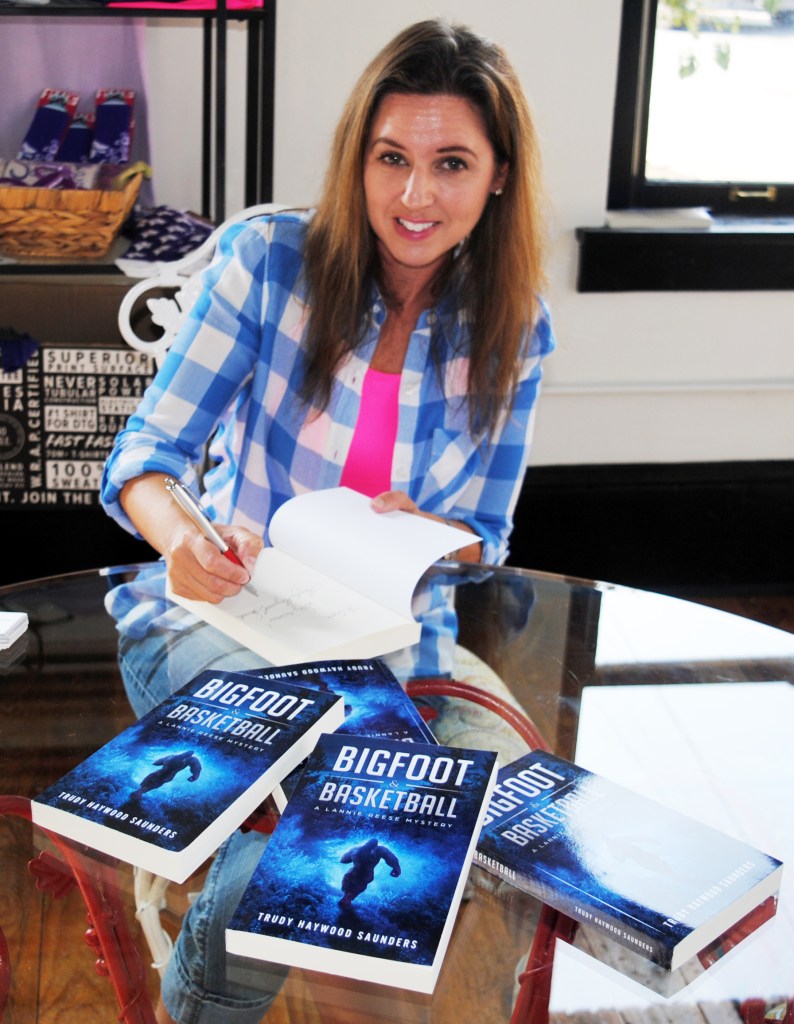 Young fiction readers might not at first find a connection between the legend of Bigfoot and the sport of high school basketball.

That is, until you look east of the Stanly County border.

A recent book signing at the Speckled Paw coffee house in Mount Gilead saw Saunders meet and greet the public, giving people the chance to experience her new book.

After working for 13 years in SCS, 12 at Albemarle Middle School, Saunders now teaches English as a second language at Candor Elementary.

The Montgomery County native has always had a passion for books. Before the publishing of her novel, Saunders had written articles and other projects, including two unpublished books.

Dedicating her book to the people of Montgomery County, Saunders said she has always had an interest in mysteries, so her story is based loosely on different elements in the county.

“This is my home and always has been…this is the area I can relate to the most,” Saunders said. “It seemed a logical place to start.”

Sightings of the Sasquatch, or Bigfoot, have been reported in Montgomery since the 1990s. In 2011, the Animal Planet show “Finding Bigfoot” shot an episode in Montgomery as well. The Bigfoot sightings have offered Troy, Mount Gilead and the county a theme for tourism.

Her current offering tells the story of 14-year old Lannie Reese, a girl working for her school newspaper in a fictional place in the Uwharrie Mountains on a story about Bigfoot.

Reese, who just started high school, finds herself on the Tillery High School women’s varsity basketball team and in honors classes while trying to work on a story she has little interest in doing. The men’s basketball team, who finds sudden success, mysteriously starts to improve dramatically.

While the mystery of the team’s improvement unfolds, a body is found by the side of a river. She then becomes determined to find out what is going on, with the help of her friend, Carson, and her older brother, Brady, who is on the basketball team. Lannie also has a mentor at school, Mr. Fields, who is the editor of the paper.

The main character’s name is an amalgam of Saunders’ grandmother’s name, Lannie, and her daughter’s middle name, Reese.  The high school is based on Saunders’ alma mater, West Montgomery. The mentor is based on a former agricultural teacher of Saunders.

As a former media specialist trying to help young men and women find books to read, Saunders talked about those challenges.

“You have to compete with so much technology. Everything is instant. A lot of us don’t want to sit down and read, even on a computer or tablet,” Saunders said. “That’s one reason it’s important to have action in there. You are competing with so many other things.”

Even though the story involves a murder mystery, Saunders said her goal was to write a clean story without unnecessary graphic details.

“There is so much smut out there. My little girl is 6, so I think, ‘Do I want her to see those words in there?’… The part where the body [is found] is not too graphic or detailed. It’s not actually about what was found but the story behind how (the body) got there,” Saunders said.

The story, Saunders said, is much more along the “Nancy Drew” lines than it is “NCIS.”

“Bigfoot and Basketball” has elements which Saunders believes will appeal to boys and girls. The female protagonist does not shy away from getting involved in the action. Reese is juxtaposed with her best friend, who is more of a girly girl.

The idea of the two friends being much different types of people also was important, Saunders said.

“It explains best friends are not always just like you,” Saunders said, adding friends should be “accepting of the differences.”

A second book in the same series is already underway, Saunders also said, with the theme of accepting difference also being important to the story.

Talking about the publishing process, Saunders said she wrote this book seven years ago where “it was sitting on the shelf.” She wanted to get the book done before the birth of her daughter, Peyton.

“You get put in the right places at the right time,” she said about moving to Candor and meeting Teresa Greene, who writes romance novels. After Greene read part of the story, she said to Saunders, “You should publish this; I’m going to show you what to do.”

Retired SCS AIG teacher Debbie Williams did the editing on the book as well. During the process, Saunders read the book to her daughter, which also helped make some changes to it.

The author said her daughter and she will be riding around the county in the car, and Payton will see places where she thinks the next book should take place.

“This looks like it would be a good place for a Lannie Reese mystery,” Saunders said her daughter would say to her.

Writing and publishing the novel has also helped Saunders and her daughter have something special to share together.

Eventually, Saunders said she hopes to see the Lannie Reese series take off to where she can write more books in the series as well as other writing ideas.