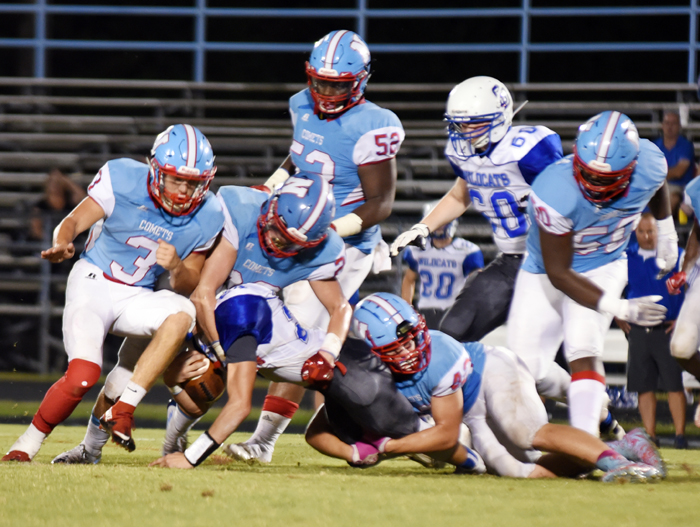 Drew Little (No. 22) and Carter Terry (No. 42) converge on South Davidson running back Damin Hill followed closely by, from left, Colby Russell, C.J. Clark and Kevon McRae in the first half of the Comets' 55-0 win over the Wildcats. (Photo by Dawn Lucas)

Over the 56-plus seasons North Stanly has played football, only four other times have the Comets shut out teams in back-to-back weeks.

The last time came in 1984 when the John Herlocker-led Comets shut out East Davidson and South Stanly in the first and second games of the season.

The Comets (5-2, 3-0 YVC) limited South Davidson to -29 net yards in the game, including -21 on the ground. The leading ball carrier for the Wildcats, Damin Hill, finished with 17 net yards on eight carries.

South Davidson also managed only one first down in the game and had only one drive out of 12 possessions which resulted in positive yards.

North’s defense also forced seven turnovers in the game, including five fumbles. One of those immediately led to points when Dylan Eudy intercepted a pitch attempt and scooted into the end zone untouched in the first quarter. The Comets’ Cooper Hogan also picked off two passes by Wildcats quarterback Jackson Ellington.

Offensively, all of the points for North came in the first half, including 35 in the opening period.

D.J. Rhone and Cameron Davis each had two rushing touchdowns for the Comets. Rhone finished with 70 yards on only three carries, including a 64-yard touchdown run. Davis scored twice, finishing with 60 yards on six attempts. He now has 80 career rushing touchdowns, one short of the school record set by Antonio Williams.

North quarterback Bailey Baker was perfect through air, completing 4-of-4 passes for 79 yards including a 21-yard touchdown to Colby Russell.