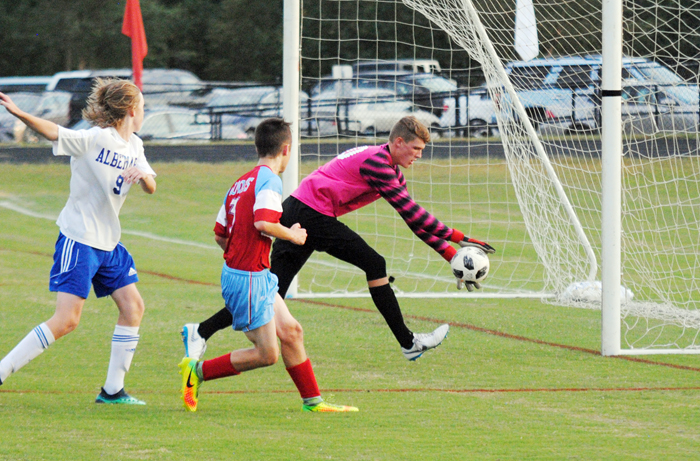 North Stnaly keeper Addison Cord stops an Albemarle shot in the first half of the Comets' 2-1 overtime win over the Bulldogs. (Photo by Charles Curcio)

The recipe for high drama on the high school soccer pitch was forged earlier this season when the Albemarle Bulldogs and North Stanly Comets met.

That night, yellow cards and fouls were both ingredients along with displays of sportsmanship between the two rivals.

The Bulldogs led 1-0 on the road, but a shorthanded goal in the second half sent the game to overtime. When two 10-minute periods did not settle matters, penalty kicks did. North outscored Albemarle 4-2 in PKs to earn a 2-1 match win.

Both teams had chances early to score. Carson Lowder had a shot on goal for North (4-3-2, 4-2 YVC) in the fifth minute, forcing Albemarle keeper Desean Horne to make the save.

Six minutes later, a long shot for Albemarle (6-5, 4-3 YVC) just went over the crossbar. Later in the first, Bryson Childress was stopped on a left-footed shot in the 15th minute by Horne.

Cord kept the game close with a one-handed save in the 24th minute and made a number of saves in the first half.

With 16:01 left in the first half, the referee issued the first of several yellow cards to North Stanly, the first going to Childress for dissent.

Levi Oliver almost tied the game with a shot for the Comets in the 31st minute that found the side of the net.

Albemarle led 1-0 at halftime, but the Comets started to get more scoring chances early in the second half.

In the 60th minute, Cord, playing the game with a strained hip flexor, was replaced by Mac Barfield in goal. He was immediately tested with two scoring chances by the Bulldogs which were unsuccessful.

Two minutes later, Childress had a scoring chance turned aside by Horne to keep the Bulldogs ahead by the early goal.

Childress, the Comets’ leading scorer, received a second yellow card in the 67th minute. The second card was for taking a swipe at the ball as it bounced into the arms of the Bulldogs’ keeper, Horne. North was forced to play a man down for the rest of the way.

In the subsequent stoppage of play, North head coach Justin Carter, who had received a yellow card earlier in the game from the referee, was issued a second yellow and then red card. Assistant coach John Williams hustled down from the press box to take over on the sideline.

During the stoppage, Cord returned in between the pipes for the Comets.

Seconds later, the Comets got a corner kick from the visitors’ side of the field. The kick went to Eli Williams, who passed to Lowder. The senior scored to Horne’s left side to tie the match, 1-1, with just over 13 minutes left in regulation.

Leo Hernandez nearly scored for the Bulldogs in the 68th minute, but his shot went just high.

A substitution violation by North, who had one too many on the field in the 73rd minute, brought the fifth yellow of the game against the hosts.

The two teams battled through the final seven minutes into overtime, two 10-minute periods. Lowder was hurt and came off the field three minutes into the first period but returned to the game.

Neither team generated a quality scoring opportunity in the extra 20 minutes, sending the game to a best-of-five penalty kick contest.

Titan Thao put North up immediately to Horne’s left, but Jevanny Guillen-Perez immediately tied the game by scoring high and right on Cord.

Oliver was next up for North and scored high and to the right of Horne, putting the Comets up 2-1.

Cord then made the first save of the PKs, smothering a Gavin Olivieri shot down the middle. North’s keeper took the next penalty kick, but his shot was well high of the goal, leaving the hosts still up by a goal.

Axel Hernnadez was Albemarle’s third shooter. The Bulldogs junior shot just slightly to Cord’s left; the Comet keeper punched the ball away for the save.

Brody Lowder put the Comets up by two goals with a lower-right corner shot past Horne, but Angel Ochoa kept Albemarle alive in the PKs with a goal past Cord in the lower left corner.

Eli Williams then stepped up with a chance to win the game. His left-footed shot scored to Horne’s right to give the Comets the win.

Cord said winning felt great but noted “a dub is a dub” referring to the W, or win. “(The win) is pretty big, but you have to keep moving on. It’s not like it’s a championship game; it’s another game.”

Talking of his efforts in the penalty kicks, he said “that’s where the work comes in, especially in practice. It doesn’t matter if you’re hurt or not, you push through it. You don’t stop anytime.”

North’s head coach talked about Cord’s efforts in goal, saying for him to play with that injury “shows a lot of courage, a lot of fight.”

Carter added, “After I was ejected, a spark lit up. I could tell right then it was going to be good…the whole team stepped it up. I’m proud of all of them.”

With Childress’ second yellow card, North was down one player for a total of 33:45, including the final 20 minutes of overtime.

“The defense stepped up. Our senior leadership had a lot to do with it,” Carter added about playing down a man. “If we have played like that with 11 guys, this game would have never made overtime. Hats off to Albemarle for a great game.”