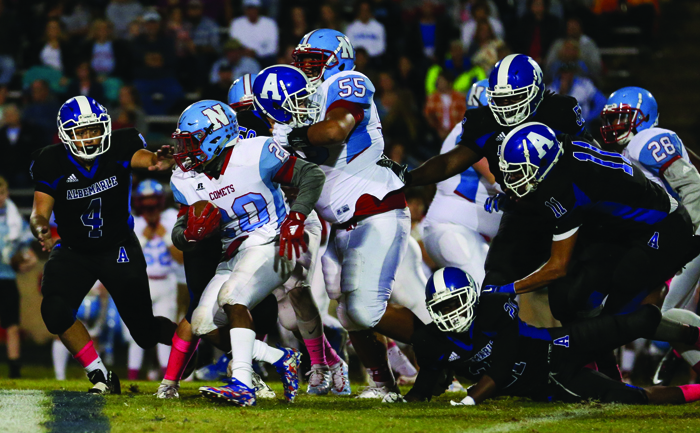 Cameron Davis gets blocking from the Comets’ offensive line, including Josh Layton (No. 55), on a run attempt. Davis tied the school record with his 81st rushing TD. (Photo by Earl Bradshaw)

It was two years ago when the North Stanly football squad set a mark for biggest margin of victory in a win over Albemarle, a 51-0 shutout on the Bulldogs’ home field.

Two years later, back at Albemarle on Friday night, the Comets rewrote several different benchmarks as North Stanly made it five wins in a row over the Bulldogs with a 55-0 victory.

This senior class for North (6-2, 4-0 YVC) is the first in school history to win four straight games on the field over the Bulldogs. The win streak is five due to the forfeit win in 2014.

The shutout win is North’s sixth over Albemarle (2-5, 2-2) and the 55-point margin of victory is the most by a Comets squad over the Bulldogs in 52 games. North’s shutout, the fourth of the season, is the most defensive shutouts since the Comets had four in 1976.

It is also the only time in school history North has shut out opponents in three straight weeks. The Comets have not allowed a touchdown since the fourth quarter of the loss to Northwest Cabarrus. In terms of time on the clock, no one has scored on North in 145 minutes and 14 seconds of football. 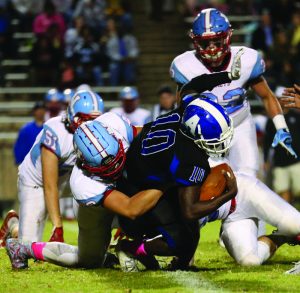 “We always go for a shutout; we expect nothing less,” Comets senior linebacker Carter Terry said after the game.

North had five sacks on the night including 2.5 from N.C. State commit C.J. Clark. The Comets limited Albemarle to three first downs in the game, all coming in the first half, and 44 total net yards. Albemarle was 7-of-18 through the air for 48 yards. The Comets got to use the team’s own turnover chain once with a fumble recovery.

On the individual record side, North senior running back Cameron Davis scored his 81st career rushing touchdown in the win. That ties him with Antonio Williams for the most touchdowns on the ground in Comets history. Davis finished with 195 yards on 15 carries while backfield teammate D.J. Rhone scored twice on the ground and had 118 yards on seven carries.

Baker was also solid through the air for North, throwing for 97 yards and two touchdowns on 5-of-7 passing. Garrett Clark and L.J. Rush hauled in touchdown throws in the game.

North also got a punt return for a touchdown from Colby Russell.

“The defense has pride this year…people would not believe how much conditioning we do,” North head coach Scott Crisco said.

He noted when he tried to do less conditioning his players asked to do more.

“This senior class has played together for a long time and they have something to prove,” he said.