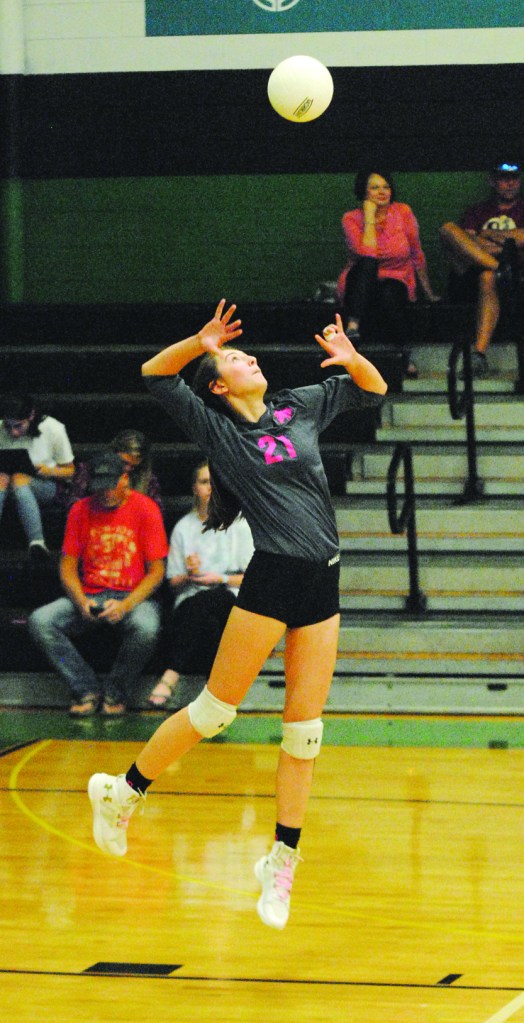 The West Stanly volleyball team continued its season with two matches, one of which was its annual tribute to those suffering from breast cancer.

The Colts have for several seasons chosen one home game in October as Pink Out night to coincide with Breast Cancer Awareness Month.

Tuesday’s home match with Central Academy saw fans and players wear pink as the Colts won over the Cougars, 3-1.

“It gives the team a chance to connect to the community through bringing awareness for breast cancer…we still like to honor people who we find out are battling this ugly disease,” West Stanly head coach LaRhonda Watkins said.

“I like for the players to see that cancer patients are fighters and while they are fighting, they live proud and with dignity,” Watkins added. “Life will go on for these patients and they will survive.”

Last year, the team honored Cheri Hinson with a number of special events and the players have continued to check on her progress, Watkins said.

“The players are very caring and when they connect by actually knowing someone effected by cancer they want to step up and do something special for them,” Watkins said.

This season, Traci Baucom, mother of a student at West, was honored by the players, coaches and staff of West along with the fans.

Baucom “is going through treatments and it was a surprise for us to see her there,” Watkins said. “She was such an inspiration and the team was honored to have their picture made with her.”

Kayli Cleaver led the Colts with 13 kills while Riley Barbee added 10 kills. Madison Kee had five of West’s 14 aces while Caylee Clayton posted 18 of the Colts’ 40 digs as a team.

Cleaver led West with 12 kills and Ali Sanders reached double figures for the Colts with 10 kills. Caylee Claton had three aces and both Raelee Furr and Addie Barbee had nine digs each.

“The players are giving it all they have to finish the season strong,” Watkins said.