Four teams traveled up to Denton to South Davidson High School for the semifinals of the 2018 Yadkin Valley Conference volleyball tournament.

Three Stanly teams made the trip and two earned victories on Tuesday night for the chance to claim the tournament title and a guaranteed birth from the YVC going into the 1A state playoffs, which are slated to start Saturday.

Gray Stone and South Stanly both earned wins on Tuesday and will play tonight at 6 for the YVC tournament title at South Davidson.

The top-seeded North Stanly Comets took on the same team they had beaten in five sets 24 hours earlier: the fourth-seeded Gray Stone Knights.

North’s five-set win Monday gave the Comets the No. 1 seed from the YVC and the school’s first undefeated volleyball team in conference play.

Gray Stone needed a win to have a chance to have a guaranteed spot in the playoffs instead of getting in as a wild card. For that to happen, the Knights needed to beat the Comets and have No. 3 South Stanly win over second-seed West Montgomery in the nightcap of the twinbill. 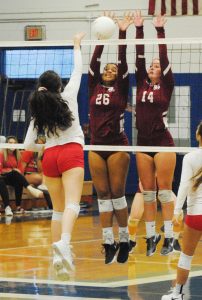 Darya Benard, left, and Karlie Griffin go for the block on a North player in the third set of Monday’s YVC semifinal matchup. (Photo by Charles Curcio)

North’s overall win streak on the season ended at 15 games with Tuesday’s loss, but the Comets will still be a No. 1 seed heading into the state 1A playoffs.

The third-seeded Rebel Bulls had not won against the Warriors in two seasons, including losses of 3-0 and 3-2 earlier this season.

In the first set, the Warriors led 5-2 early, but South rallied back. An Emma Lemons’ kill got South back ahead 7-6 early. After West Montgomery tied the match, the Bulls scored four points in a row, including kills from Lemons and Sidney McSwain, forcing a Warriors timeout.

South continued to build the lead in the first set as another Lemons kill put the Bulls up 19-11, prompting another timeout from West Montgomery.

Later in the first set, Abbie Yarboro got a kill for the Warriors to pull within five, 23-18, but South finished the set with kills from McSwain and Mattie Hinson, winning by seven.

The second set saw the Bulls go on a 7-1 run to start the frame, stopped by a West Montgomery timeout. Adison Campbell delivered an ace in the run along with a tip kill from McSwain. 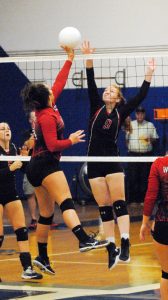 South’s Alexis Faulkner challenges for a 50-50 ball at the net in the Bulls’ 3-0 semifinal win. (Photo by Charles Curcio)

The Warriors rallied to within three points, 12-9, but another four South points in a row, including a Star Lee ace, put South back up by seven. Campbell ended the second set with an ace, giving the Bulls a win by 13 points in the second set.

West Montgomery started stronger in the third set early, going up 4-1 before South slowly got back into the lead. A Campbell kill put the Bulls up for good, 7-6, then South went on a 6-0 run to lead 13-7, causing a timeout from the Warriors.

South’s lead reached double figures in the third set, as much as 12 points, 20-8, before a Keeli Crisco kill and a South ace eventually ended the set and the match.