Barry Lynn Almond (Buster), 62, of Albemarle, surrounded by his wife and family, peacefully went to be with the Lord on Thursday, October 18, 2018 at Carolinas HealthCare System Stanly in Albemarle.
Barry was born April 27, 1956 to Louise Almond and the late Paul M. Almond. 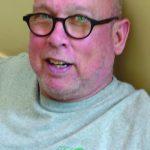 Barry was a loving and devoted husband, father, grandfather, son, brother and friend. Always had a smile on his face and brought many to others around him.
He was a graduate of North Stanly High School in 1974 and Gardner-Webb College in 1978. He worked along side his father in the mechanic business, Almond’s Garage, until his father passed. He then operated BL Almond Garage for almost 30 years. He later worked at Fiberon.
He was an avid T.V. watcher, knowing any and everything about any John Wayne movies or MASH. He also played softball, played golf, scuba dived, rode his Harley, and loved his dog, Tiki. He was a co-owner operator of Mountain Brook Golf Course.
He is survived by his wife, Elizabeth L. Almond of the home; daughter, Natalie (John) Hinton of Belmont, NC; son Nathan (Erica) Almond of Norwood, NC; mother, Louise Almond; sister, Darlene (George) Burleson of Albemarle. He also leaves behind grandaughters, Skyler and Willow Almond and Amelia Hinton and grandson, John Agustus (Gus) Hinton. He also leaves behind with many memories, his nephew, Shane Harkey, who loved him dearly, and nieces Amy Hammonds and Shyane Burleson. Also great nieces and nephews.
His arrangements are as follows, Memorial Service Monday, October 22, 2018, at 3:00 PM, at Lakeview Baptist Church, 32496 Pennington Road, Albemarle, officiated by Rev. Tab Whitley. Visitation will follow in the church Family Life Center. Family will meet at other times at his mother’s home.
Hartsell Funeral Home of Albemarle is serving the Almond family.
Online condolences may be made at www.hartsellfh.com.