Colts dominate on both sides in rout of East Montgomery 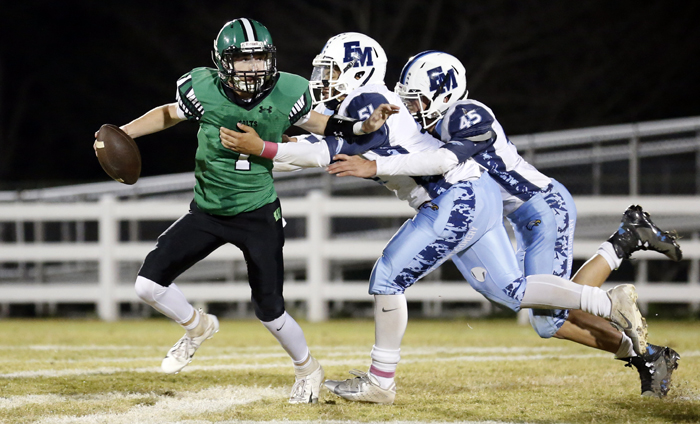 West Stanly quarterback Nick Paker fends off East Montgomery defenders Tristen Gardner (No. 51) and Sean Davis (No .45) in the Colts' 52-7 win Friday night over the Eagles. (Photo by Earl Bradshaw)

The West Stanly football program entered Friday’s home game with East Montgomery looking to move to 2-0 in conference play for just the third time in the last 15 seasons. The other two times the Colts were 2-0 in conference came in 2005 and 2016.

West also needed a win to further establish a foothold in the postseason, with the chance of hosting a home game with continued success.

A dominating ground game combined with a stout defensive effort lifted the Colts to a 52-7 win over the Eagles.

West (5-3, 2-0 RRC) combined for 420 net yards on offense, including 281 yards on 45 carries. Quarterback Nick Parker scored three rushing touchdowns, finishing with 52 net yards in his second game back after missing games due to injury.

Parker was nearly perfect in his passing efforts, completing 6-of-7 passes to five targets for 93 yards. Daniel Hansen caught three passes for 49 yards while tight end Brack Morgan caught two passes for 42 yards and came one outstretched arm short of a touchdown in the second half.

Defensively, the Colts limited East Montgomery (3-6, 0-3 RRC) to 151 total yards of offense. Aiden Watts threw for 105 yards and an early touchdown, completing four of his first five passes in the first quarter. However, he was 4-of-9 the remainder of the game and was sacked twice.

The Eagles also had just 46 yards on the ground on 26 carries. None of the running backs for East Montgomery had more then 20 net rushing yards.
Poole took care of the opening drive himself, carrying the ball three times for 58 yards, the final eight on a touchdown run. Aldo Cruz’s point after put the Colts up 7-0 in the first minute.

East’s best offensive possession of the game was the team’s opening drive. The Eagles converted a fourth down on a nine-play, 83-yard march down the field. Watts found Ziquan Smith early in the drive wide open for a 58-yard pass, then led him on a pass into the end zone for an 18-yard score. Ruben Velazco-Perez’s point after tied the game 7-7.

From that point, West scored 45 unanswered points, including retaking the lead for good on the team’s second drive of the game. West went 64 yards in 10 plays and converted twice on fourth down.

Parker ran for 18 yards the first time, then found Will Barbee for a 26-yard pass to the Eagles’ three-yard line. On the next play, Parker scored on a keeper up the middle from three yards out. The point after put West up 14-7. 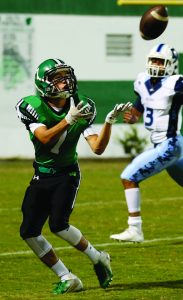 West Stanly wide receiver Will Barbee hauls in a 26-yard pass on fourth down to keep a Colts’ drive alive. (Photo by Earl Bradshaw)

The Colts got the ball back at the seven-minute mark of the second quarter and again drove 60 yards in 10 plays. Parker’s second 3-yard TD run put the hosts up 21-7.

East turned the ball over on downs back to the Colts with 37 seconds left in the first half. Passes from Parker to Morgan and Poole set up a 40-yard field goal by Cruz as the clock expired, giving West a 24-7 halftime advantage.

In the third quarter, the West offense continued to roll. After the Colts’ defense got a three-and-out, Parker scored on a 29-yard touchdown run, bouncing off tacklers, then outracing the Eagles to the corner of the end zone. Cruz’s PAT put the Colts up 31-7.

The Eagles had the ball twice in the third quarter but managed only one first down, giving the ball back to West in the final 15 seconds of the period.

West then drove 62 yards in nine plays spanning into the fourth quarter. Lukas Scott scored his seventh rushing touchdown of the season to cap the drive, then a two-point conversion run from Hunter Stoker put the Colts up 39-7.

Montgomery added a late touchdown with 5:10 left in the game, capping a 52-yard, 7-play drive with a one-yard plunge.

West defender Hunter Stoker. The senior intercepted two passes in the final period, the last of which he returned 52 yards for a touchdown as the clock ran out.

“The offensive line did a great job of getting out in front; it makes my job easy,” Parker said.

He talked about the Colts’ offense having scored so many points the last two weeks, saying “a lot of hard work in practice. I credit the running backs and the wide receivers; it makes my job easy to pass on play action.”

Stoker talked about the defensive efforts of West in the game, saying “our front seven were phenomenal. It makes the pass easier on (the defensive backfield) to not have to worry about the run.”

He added “when the front seven get pressure (on the quarterback) it gives us more time to get interceptions and knock down passes.”

West head coach Brett Morton said the Colts’ offensive line “has gotten better as the year has gone on. We’re trying to put them in more comfortable situations … we are trying to be our best at a few things, get off the ball and play fast.”

Morton said West’s offense “is a different animal” with Parker at quarterback, adding “he’s got rhythm. He knows where the ball goes and how it needs to go there.”

The Colts finish the second game of its current two-game home stand Friday night facing the Anson County Bearcats. Coached by former West Stanly standout running back Ralph Jackson, the Bearcats (4-4, 1-1 RRC) were off this week after losing to Mount Pleasant 28-23 on Oct. 12.