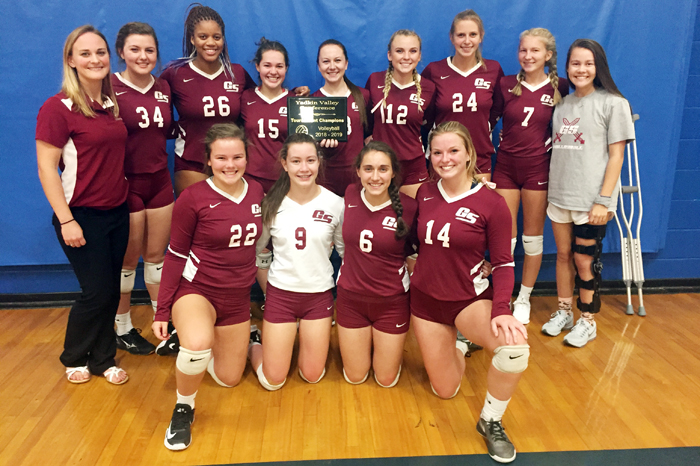 The 2018 volleyball season for the Gray Stone Knights and first-year head coach Jennifer Holmes has gotten more successful in terms of wins later in the season.

After having a long conference win streak end early in the season, the Knights finished fourth overall in the Yadkin Valley Conference standings, having lost matches to North Stanly and South Stanly along with losses to West Montgomery and Uwharrie Charter.

Gray Stone entered the YVC tournament as the lowest seed in the four-team tourney, shortened due to school closing from weather last week.

However, the Knights avenged two earlier losses to North Stanly with a three-set sweep in the semis Tuesday. Gray Stone looked to do the same against South Stanly in Thursday’s championship finals.

South had a similar experience in the semifinals, having avenged two regular-season losses to West Montgomery with a three set win.

Gray Stone overcame a sluggish second set and the offense started firing on all cylinders as the Knights earned the school’s third conference title in four seasons with a 3-1 win over South.

In the opening set, Gray Stone jumped to an early 9-3 lead, including a double block on South’s Mattie Hinson by the Knights’ Karlie Griffin and Darya Benard.

South trailed 17-9 at one point in the first set, prompting a timeout, from which the Bulls rallied. Sidney McSwain had two kills in a four-point run which caused the Knights to call time.

McSwain’s kill and block later in the set had the Bulls within two points, 18-16. A service error by South and an ace from the Knights’ Mattie Burris put Gray Stone back up 20-16. The Knights scored the final four points of the match and won the first set by seven.

Tied 2-2 early in the second set, South caught fire and took a commanding lead with a 10-1 push, which included kills from Hinson and Keeli Crisco along with aces from McSwain and back-to-back aces from Hinson. A third Hinson ace on the run put the Bulls up 12-3.

In the second set, South was called for four hits but the referees reversed the call saying the ball was blocked by Gray Stone. The Bulls went on to outscore Gray Stone 12-5 after that point, winning the second set by 16.

The Knights jumped into the lead early in the third set. With the scored tied 3-3, the Knights built a four-point lead, forcing a South timeout. The Bulls answered with four straight, causing Gray Stone to call a timeout.

Both teams continued to exchange leads and ties midway through the third set. Tied 18-18, Griffin got a tip kill. After South cleanly blocked Gray Stone on the next point, the Knights’ defense covered the ball and got Griffin another attempt. Her kill put Gray Stone up 20-18 as the Bulls called the team’s final timeout of the set.

The Bulls were not done yet in the third set. After a Gray Stone service error, McSwain tied the match with a kill.

Griffin then placed a kill right on the back line which started a four-point run for the Knights. Burris added a tip kill as Gray Stone took the third set by four points.

In the fourth set, Gray Stone slowly built a lead after taking an early advantage; the teams matched each other kill for kill but the Knights were able to stay in front. Leading 8-6, the Knights went on a 6-1 run, including a clean block and two kills from Burris along with an ace from Christen Clontz.

South called a timeout during the run but was unable to get back into the set until later. The Bulls trailed by as much as eight points, but an Emma Lemons kill got South within five points, 17-12, forcing a Gray Stone timeout.

The Knights pushed the lead back to seven when Benard got a clean block at the end of a long rally, putting Gray Stone up 20-13.

In the final points of the match, McSwain got South back within four points with two kills, 22-18, as the Knights called timeout. However, the match ended on a Bulls service error, giving Gray Stone the set and match.

Burris talked about the team’s efforts after the second set, saying: ”We just realized our defense was struggling so we had to rely on our offense. After that game, we had to pick it up and realize (that set) was over.” She added the offense helped get the team excited which helped the Knights play better defense.

The senior added winning the tournament means a lot “especially since we were on the bottom in this tournament, only taking the top four.” She added the win “will give us motivation to keep playing hard” as the state playoffs open Tuesday.

Griffin, also a senior, said in the huddle after losing the second set “we talked about bearing down and getting it together, which we did.” She added Gray Stone “works a lot on placement” in terms of offensive attack and “I think that helped us in this game.”

Griffin said the win and the tournament title “shows the potential we had all along” after the team’s slow start this season.

Holmes said Gray Stone has a talented, experienced front row “and that really helps.” She added her team’s defensive coverage and movement is ”something we have been working on a lot.”

”I asked my seniors to be my leaders on the court. It is absolutely 100 percent them. They have finally come together, taken the team and led them forward. It’s their leadership,” Holmes said of the team’s recent success.

Seeding for the 1A state playoffs, which will likely include top-seed North Stanly along with Gray Stone and South Stanly, are scheduled to be announced on Saturday.