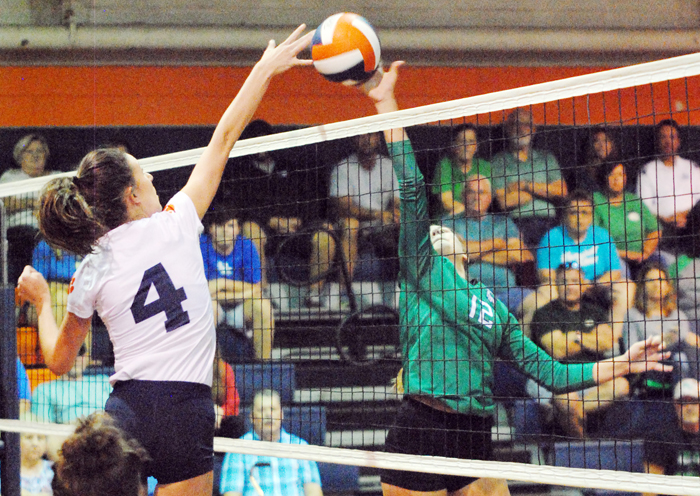 West Stanly's Addie Barbee (No. 12) and Anson's Revie Byars go for a 50-50 ball at the net in Wednesday's RRC semifinals match. (Photo by Charles Curcio)

West earned a chance to face the Tigers another time by sweeping the Anson County Bearcats in Wednesday’s semifinal matchup in Anson with scores of 25-16, 25-19 and 25-18.

Kayli Cleaver led the Colts (18-6) with 12 of her team’s 38 kills, while Addie Barbee had 21 of West’s 31 assists as a team. Dani Moss led West with three aces while Caylee Clayton reached double figures with 12 of the Colts’ 47 digs.

The Colts jumped out to a 10-4 lead early in the first set, including a Moss ace and a Raelee Furr kill, forcing a Bearcats timeout. West led by as much as 14 points, 22-8, on a Madison Kee kill, eventually winning the first set by nine.

West and Anson were tied early in the second before four straight points, including a Furr kill, put the Colts up 6-2. A Cleaver kill midway through the set put West up 15-8.

Anson called timeout trailing West 20-13 in the second set, and got to within five points, 23-18, but the Colts scored the final two of the frame.

The hosts started strong in the early portion of the third set, building a quick 5-1 lead over West, forcing a Colts timeout. A Cleaver solo block helped spur a West run to get the set tied.