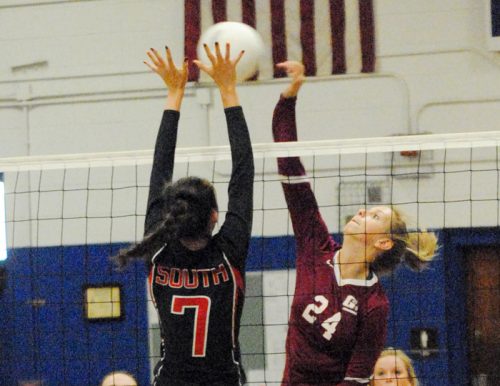 Gray Stone's Mattie Burris goes for a kill with South Stanly's Sidney McSwain going for the block. Both teams will play Tuesday in the first round of the state playoffs. (Photo by Charles Curcio)

The top seed from the Yadkin Valley Conference was the regular-season champions, the North  Stanly Comets.

South Stanly will be the other Yadkin Valley Conference team hosting a playoff game Tuesday. The Bulls (15-8) will be a No. 15 seed and will take on the Mount Airy Granite Bears (13-12), who are the No. 18 seed. Mount Airy finished third in the Northwest Conference behind top-seed East Surry and No. 11 South Stokes.

Gray Stone (12-7), winners of the YVC tournament championship, will be the No. 22 seed on the road in the first round of the state playoffs. The Knights will travel to Walnut Cove to take on the South Stokes Sauras (19-7).

The Colts will be at home Tuesday night at 7 as the No. 13 seed to take on No. 20 East Burke. The Cavaliers finished third in the Northwestern Foothills 2A conference.