Loved by so many, Lee William Kinard, Jr. age 86 died peacefully on Saturday, October 20, 2018, surrounded by family. The family would like to thank the wonderful nurses at Cone Hospital for their compassionate care and attention.
Lee was the oldest of four children born to Henrietta Grace Winecoff Kinard and 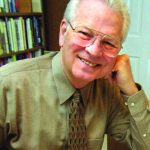 Lee William Kinard, Sr. on November 5, 1931.
He married the love of his life, Anne Courtney Milton on October 11, 1952. They just celebrated their 66th wedding anniversary.
Lee is survived by his wife Anne, their children Beverly Ann Kinard Marsh (Robert) of Tucson, Arizona, Valerie Grace Kinard Surasky (Charles) of Atlanta, and Lee William Kinard III (Normandee) of Canton, Georgia.
Grandchildren, Jessica Lynn Kinard Easley (John) of Charlotte and Austin M. Kinard of Greensboro. Honorary grandchildren Anna Gentry and Luke Gentry (children of Kim and Todd Gentry).
Beloved sisters and brother, Jane Coulter of Venice, Florida, Judy Thomas (Jack) of Jamestown and Glenn Kinard (Dianne) of Fairfax Station, Virginia. Sister-in-law Emily Milton Sells of San Antonio, Texas.
Nieces and nephews, Ashley Sells, Jack Thomas (Rachel), Karen Thomas, Jonathan Kinard (Lauren), Christopher Kinard (Meryl) and Mathew Kinard (Nicole).
Lee served in the Army (as Chief of the Radio and TV Section) during the Korean War at Fort Bragg and in Puerto Rico. He was particularly proud of having participated in the Army’s first atomic weapons maneuver. He was awarded the Certificate of Merit and promoted to Staff Sergeant for his filmmaking efforts.
Lee got all three of his degrees at UNC-G along with his girls. He received undergraduate and graduate degrees in English and a doctorate in Education. He received six School Bell awards during his life and was committed to education in all forms.
He worked in radio in Albemarle until starting at WFMY-TV on April 16, 1956. He created the Good Morning Show in December 1957 and continued the development of that show until 1999. He produced award winning documentaries on a variety of local, national and international topics. In 2000 he became the Executive Assistant to the President of GTCC and helped to create the Larry Gatlin School of Entertainment Technology and as the Institutional Historian he oversaw the Office of Marketing and Public Information. He worked in that position until he retired finally in 2014.
He was a member of the North Carolina Association of Broadcasters Hall of Fame and a recipient of the Silver Service Award presented by the National Television Academy of Arts and Sciences. He thought his most significant award, however, was the one he most recently received, the Unsung Hero Award from the International Civil Rights Center and Museum.
He was the author of three books and traveled the world.
He loved most in life his wife Anne, their children, his fur babies Buffy and Molly, in addition, his garden, his books, his travels, his writing and his memories.
Always a wonderful teller of stories, he reveled in weaving a magical tale to whomever would listen. He interviewed everyone he ever met and was genuinely interested in their life and experiences. He loved cooking big breakfasts, going to garden stores, shopping with Anne and going to the beach. Things are much quieter without him. He will be missed.
The family will receive friends Thursday, October 25, 2018 from 3:00 – 7:00 PM at Forbis and Dick Guilford Chapel, 5926 W. Friendly Ave., Greensboro, NC 27410.
In lieu of flowers, Lee would have appreciated any donations to Reading Connections, the Humane Society, GTCC Foundation and Pfeifer University.
Forbis and Dick Guilford Chapel is serving the Kinard family and online condolences may be offered at www.forbisanddick.com.