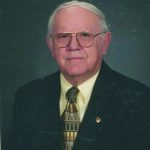 Son of the late Thomas Fairley Underwood and the late Hattie Thompson Underwood, he was preceded in death by two sisters, Lois Underwood Treece and Mabel Underwood McManus.
Survivors include his loving wife of 60 years, Luedith W. Underwood and two sons, Greg (Jodie) of New London, NC and Tony of Weddington, NC. His seven grandchildren, Hannah Underwood Deal (Charles), Blake Underwood, Meredith Underwood, Ben Underwood, Hailey Underwood, Christine Underwood and Catherine Underwood will cherish many fond memories of time with their “Paw-Paw.”
Ed was a Korean War combat veteran where he served in the US Army.
After an honorable discharge, he attended Pfeiffer College before beginning a career as manager of Carolina Oil Company and owner/operator of a towing company, Carolina Motor Company.
He befriended countless people throughout his nearly 60 years of business and public service. He had a passion for helping others and loved everyone he met.
His public service included two terms as a Stanly County Commissioner, serving as Chairman for one year and for 17 years as a City Councilman for the City of Albemarle.
In addition, he was a member of the Board of Trustees at Stanly Community College for over 20 years, a member of the Planning and Zoning Board for the City of Albemarle and a past member of the Albemarle Optimist Club.
He also will be fondly remembered by many as coach of the Carolina Oil Orioles Little League baseball team throughout the 1970s where he proudly coached his two sons.
He was a lifelong member of West Albemarle Baptist Church and formerly served on the Board of Deacons and was a past president of his Sunday school class.
The family wishes to thank the wonderful staff at CHS-Stanly and Hospice of Stanly and the Uwharrie where he received outstanding care and compassion over the last few days.
Memorials can be made to West Albemarle Baptist Church, 336 Church Street, Albemarle, NC 28001 or to Hospice of Stanly and the Uwharrie, 960 N. 1st Street, Albemarle, NC 28001.
Visitation will occur Wednesday, October 24, 2018 at Stanly Funeral & Cremation Care from 6 PM until 8 PM.
A funeral service will be held on Thursday in the West Albemarle Baptist Church sanctuary beginning at 11:00 am, followed by interment at Stanly Gardens of Memory.