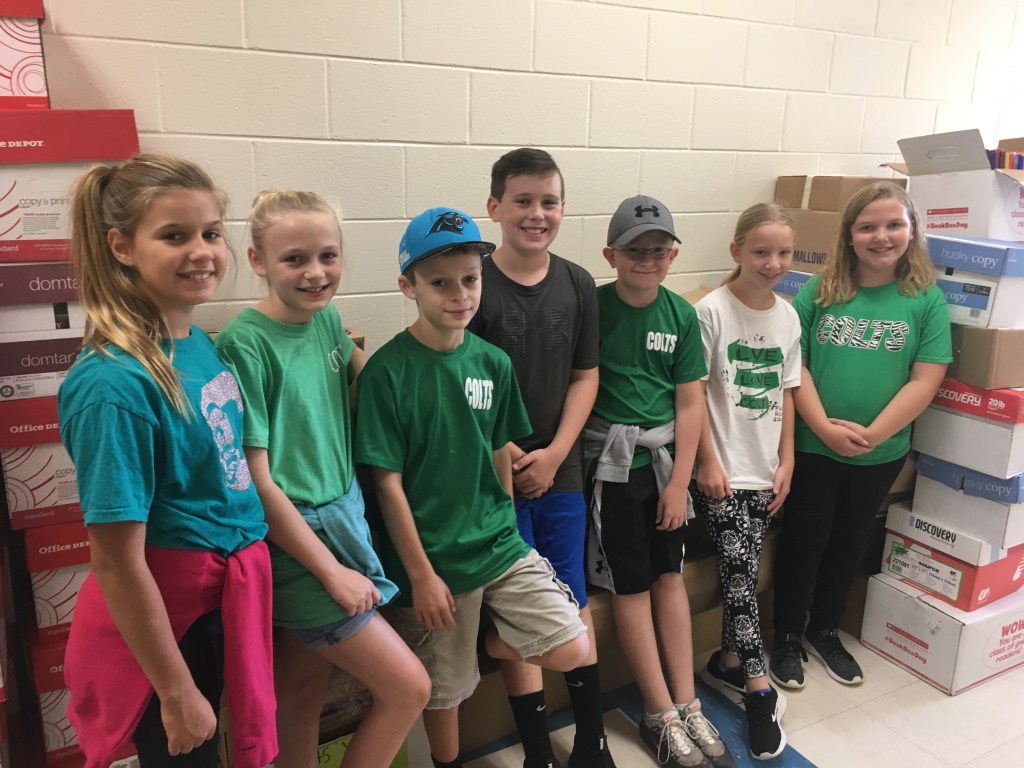 It is unlikely a shark would ever encounter a colt.

And if a shark did meet with a colt, it would surely devour it and anything with it.

That is true in this instance, but in a good way.

Belville Elementary, known as the sharks, received a donation of around $5,000 worth of supplies from the Colts of Locust Elementary. The Colts wanted to help out a school recovering from Hurricane Florence.

But it was not just any school.

Belville Principal Rick Hessman is a former principal at Locust.

“I was principal there and really enjoyed my time there a lot,” said Hessman, who spent 15 years in Stanly County Schools, as a teacher, coach, athletic director and principal at schools such as South Stanly High, East Albemarle Elementary and Stanly Early College.

He is in his third year as principal of Belville, a K-5 school in Leland in Brunswick County. It is about four miles outside of Wilmington and has a student population of more than 800, which is about double what Locust was when Hessman led it.

“We were out of school for five weeks,” he said. “Last Friday was the first Friday we’ve been in school since Sept. 7.”

Hessman said 13 staff members and 60 students were impacted severely by the hurricane. The school had 18 trees down and damage to its roof, cafeteria and seven mobile classrooms. But he says it was not one of the worst hit.

Businesses and churches have donated supplies to help Belville, but he said the delivery by Locust students, teachers and parents on Friday was extra special.

“It started out with one history class and it turned into a competition among grade levels and community,” Hessman said.

The Locust delivery included 44 boxes of paper and 25 boxes of school supplies. The drive began through the social studies classes of Wendy Tucker and it grew to a community fundraiser from there. Tucker had communicated with other teachers and school secretary Louise Green, who has remained a friend to Hessman. 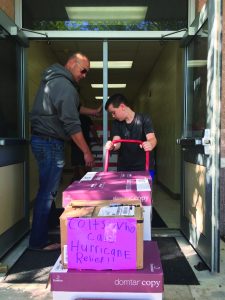 Contributed
Sherman Greer, left, and his son Colt help load a truck bound for Belville Elementary School. Last Friday was the first time since Sept. 7 Belville that the school had classes on a Friday since Hurricane Florence.

Sherman Greer was one of the parents who helped delivery the goods to Leland.
Greer, whose son Colt now attends the same elementary school he once did, said “our kids and parents are very fortunate to have the teachers and staff at Locust Elementary and all of Stanly County Schools.

“They are all dedicated to giving their knowledge and talents to better our students and it shows,” Greer said. “I am proud to be a small part of our community.”

Michelle Helms was able to provide 300 of the approximately 800 books given to Leland area students in the Colts Who Care campaign.

Helms usually donates books twice a year to Locust students in honor of her son, Brantlee, who died of illness a few years ago.

“It was a community effort,” said Tucker, now in her third year at Locust.

“I’m hoping we can find other projects. That’s as important of an education as anything — helping your fellow man and taking the time to do good for others.
“I’m glad we were able to make that connection back with Dr. Hessman,” she added.

Hessman says he can’t express how much he appreciates the donations.

“It says a lot for that community and that staff, to help people they’ve never met other than me,” he said. “It makes me feel good that they have a good memory of Dr. Hessman’s time there and they’ll always have a fond place in my heart.”