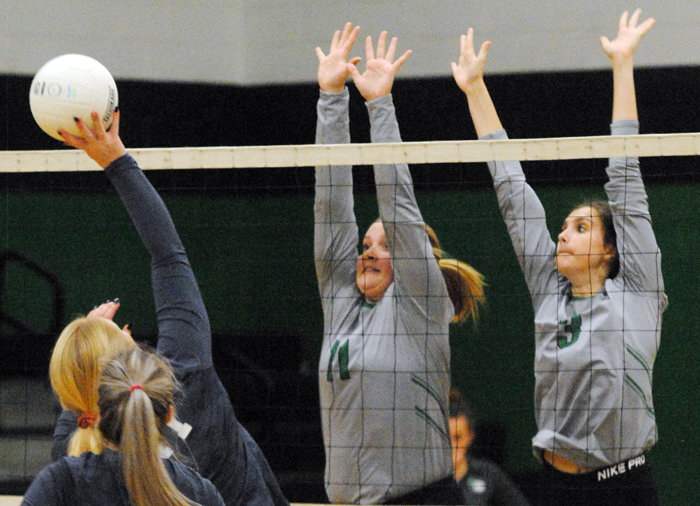 The West Stanly volleyball team kept a string alive of hosting first-round 2A playoffs games intact on Tuesday when the 13th-ranked Colts hosted No. 20 East Burke.

West made it two home playoff wins in the past three seasons sweeping the visiting Cavaliers with scores of 25-20, 25-19 and 26-24.

Freshman Kayli Cleaver and sophomore Madison Kee each had 11 kills to lead the Colts; the hosts had 40 kills in the game. Cleaver and Kee both had two assisted blocks along with Dani Moss while Kee also had a solo block.

Caylee Clayton had 17 of West’s 57 digs while Raelee Furr had two of the Colts’ six service aces.

The opening set was close before an ace from Addie Barbee put the Colts up 16-13, forcing a Cavalier timeout.

A kill from Furr along with an Ali Sanders ace helped West go up by seven points, 21-14 later in the set. East Burke trailed by as much as eight points, 24-16, but scored four points in a row. A Kee kill gave West a five-point win in the first set.

East Burke jumped out to an 8-4 advantage early in the second set and led by as much as five points, 14-9, midway through the frame.

Trailing 15-11, West rallied with a 6-0 push including kills from Kee and Moss along with a solo block from Kee.

The turning point in the set came when both teams scrambled on a long point but Kee found room and put down a kill, tying the set, 18-18. From that point, West outscored East Burke 7-2 to rest of the way as a Cleaver kill gave West the second set by six points.

In the third set, East Burke jumped out to a 4-0 lead early and the two teams battled back and forth in the earlier stages of the set. The teams exchanged leads and ties throughout, with the Cavaliers taking a 21-19 lead on a kill from No. 8.

A big block by East Burke went high in the air and out on the back line, then West took the lead when No. 8 hit long.

West had the chance to end on a 24-23 game point but a hard serve was sent right back to the Colts’ back line and West was unable to corral the loose ball, forcing extra points.

On a long point, the Colts covered defensively and got the ball to Cleaver, who tip just hit front of the East Burke libero, giving West another game point.

Another hard serve by West was received by the Cavaliers but the ball carried over to the next, where Cleaver promptly sent the ball down for a game-winning kill.

Furr after the match said the team’s energy was better this season after losing the conference to Mount Pleasant last season. “We came back wanting to win that so bad. When we get down, we always get each other back up.”

She added winning the tournament title over the Tigers last week helped Tuesday night because of “how amazing” it felt to win.

Cleaver talked about the size of West at the net, saying the attack “all starts with the pass. When we get up there and put it away, it’s just the best feeling…(a kill) just gets everybody up.”

The freshman also talked about the team’s approach to matches this season saying the veterans players on the team took herself and Clayton in and made them feel welcome.

“As the season has gone, we have hung out a lot and become a family. We have each other’s back; we are all in this together. ”

Assistant head coach Steffi Dutton talked about the focus for the team after losing to Mount then rallying to win the RRC tourney.

“We kept pushing into the girls; this game is full of errors. In order for someone to get the kill, the other team had an error. They are understanding that,” Dutton said.

“These girls are understanding how to believe in themselves; that has been our main struggle the last few weeks…it’s all about finishing.”

“Our defense did a fantastic job leading the offense where to go,” Dutton added.

West Stanly goes on the road tonight at 6 when the Colts travel to No. 4 West Davidson (22-6). The Dragons advanced Tuesday with a 3-0 sweep of No. 29 North Davidson.