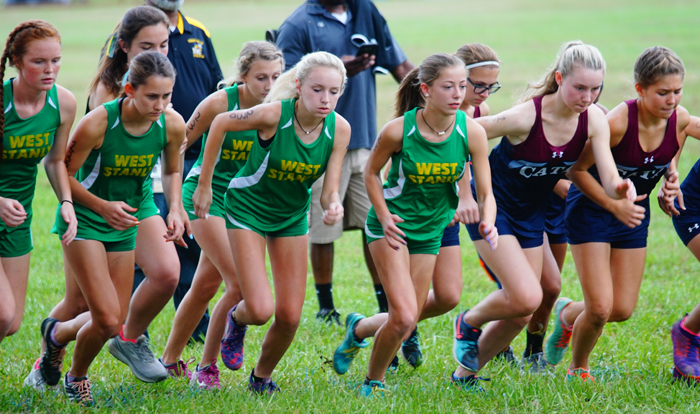 The West Stanly women dominated the competition running to their third straight RRC title, while the Colt men finished in second place for the second straight year.

The teams were only allowed to put seven runners in the varsity race with the top 12 finishers receiving all-conference honors.

All seven of the women’s Colt runners finished in the top ten with each being named to the RRC all-conference team.

The Colts finished with the low score of 23, followed by Central Academy (55), Mount Pleasant (76), East Montgomery (106) and Forest hills (139). Anson did not have enough runners to score as a team.

Senior Pierson McManus entered the conference meet undefeated in regular-season RRC  races this season. Her only defeat by a conference runner was to teammate Natalie Almond at the Wendy’s Invitational.  Unfortunately, McManus found herself with a stomach virus on Sunday and Monday which left her less than 100 percent in her attempt to defend her 2017 RRC championship.

Despite her condition, the individual championship remained with the West Stanly Colts. Standout freshman Natalie Almond rose to the challenge running a great race to keep the individual crown with the West Stanly team. The talented freshman pulled away from the pack early then held on for the win running a personal record 21:01. Almond was then voted RRC Cross Country Runner of the Year by the coaches.

Down five pounds from being sick McManus ran a valiant race. With a half mile to go the senior found herself with CATA’s Brooke Butler. The pair dueled it out in attempt to catch Almond before the finish. Butler was able to out sprint McManus to the finish with McManus closing out her conference career in third place with a quality time of 21:15.

The rest of the top seven Colts each enjoyed highlight days. Senior Brooklyn Simpson had been chasing the 22-minute barrier since her freshman season. Simpson left no doubt racing to a personal record 21:42 for fifth place moving her to 10th on the Colts top 50 list.

Laney McCollum proved she is the second fastest freshman in the conference dropping her personal record by 56 seconds to 22:56 for ninth place, while moving to 28th on the Colts all time list.

Junior Katherine Pollard narrowly missed all conference last season but made sure this season by running a personal record 23:16 for tenth place, while moving to 33rd on the Colts top 50 list.

The Colt men were predicted to finish third in a tight battle with Central Academy and Mount Pleasant but the Colt men ran well enough to move to the runner up spot for the second straight year.

The race started fast with a lot of shuffling for position throughout the race. It was impossible to tell which team won the meet as the runners crossed the finish line.

While the Colts had four runners in the top ten compared to three runners each from Central and Mount Pleasant, positioning became the most important factor. The Colts were packed together but the Cougars packed a little better to win the team championship.

Central Academy narrowly beat the Colts by two points, finishing with 41 points. Mount took third with a 46 followed by East Montgomery (123) and Forest Hills (139). Anson County did not score as a team.

Junior Korbin McNeill led the Colts finishing in sixth place at 18:11 his second-best time of the year. The three Colts to follow all ran personal records, while also moving up the Colts top 50 list.

Sophomore Austin Huneycutt had the most outstanding and most improved race of the group. Huneycutt dropped almost a minute off his time running 18:25 for ninth place, getting him on the top 50 list for the first time as the 36th fastest Colt all time.