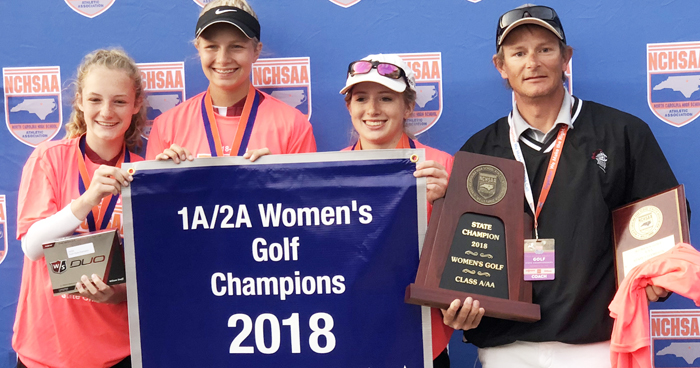 The Grey Fox course at Foxfire Village provided the backdrop for the 2018 1A/2A state championship meet for women’s golf on Monday and Tuesday this week.

A two-day, 36-hole event saw the Knights as a team in contention for the school’s first women’s golf state title after the first day of competition. Gray Stone rallied from a three-stroke deficit to claim the schools’ first state championship in women’s golf.

Head coach Michael Phillips said the season had ups and downs but the girls “showed what it means to be a Knight. They never gave up and worked hard to improve on the regular season’s setbacks. All of the girls came together as a team early on in the season and continued to support each other all the way through the state championships.”

The week between Regionals and States, Phillips said the team “worked hard to improve on the one thing from regionals that gave us issues: putting. We went to Piney Point Golf Course and putted.
Phillips added the team “made changes where needed. In just a week, there was a big improvement. I saw Lauren Denhard, Katelyn Griggs, and Aliza Simpson gain a confidence on the greens that was not there through out the regular season and regionals.”

Gray Stone stood after the opening 18-holes of the 1A/2A state meet with a team score of 278, three strokes behind Raleigh Charter for first place.

Lauren Denhard shot an 81 to lead the Knights after the first round, finishing nine strokes over par. She finished fifth individually, with Katherine Schuster of First Flight leading overall. Schuster shot the only sub-par round of the first 18, shooting a -4 round of 68 on the par-72 Grey Course.

“Being down by only three strokes after the first day. I really started to think they had a shot to win the whole thing,” Phillips said.

On the second day, the Knights’ Denhard improved by four strokes overall from the first round, shooting a +5 round of 77 to finish fourth overall individually with a 158. First Flight’s Katherine Schuster pulled away from the field as an invididual in the second round shooting five-under par (71) and a two-day total of 139 to win her second straight individual state title by four strokes over Forbush’s Mallory Forbes.

Griggs finished 24th on the individual standings shooting a 93 in the second round to finish with a 182 total. Simpson improved on her first-round score with a 106 to finish tied for 59th individually with a 214.

Regarding the win, Denhard, a senior, said “I am proud of all of my teammates and the hard work they put into this season.”

During the play at states, Phillips said the three players “had a determination to play the best game of their lives and continue what they had started in August. They battled through everything that the course gave them. From the unmowed fairways to a lake that just seemed to be a magnet for the balls of all 78 players and just kept going. They never gave up.”

In the second round, Phillips said some nerves showed up but they didn’t give in and all three put their tee shots on the first hole in good shape.” He told them during the round to “not worry about the results; just play your game.”

As the round wore on, the Gray Stone coach said the girls “looked exhausted but the excitement of the moment kept them going.” Within the next hour, the Knights won the title.

Denhard, a senior from Salisbury, will attend Belmont Abbey and play golf for the Crusaders in the fall while Griggs is a freshman from Lexington and Simpson is a sophomore from Norwood. Other team members include seniors Riley Ritchie from Albemarle and Bonnie Showfety of Salisbury and sophomore Phoebe Shields from Salisbury.

Phillips said it was “an honor and privilege” to coach the team this season. He also thanked the team’s swing coaches and Charlie Maness for working with the team as well.

The Gray Stone women’s golf team qualified for the 1A/2A state meet after placing second at regionals at Cedarbrook Country Club in Elkin on Oct. 15.

Katelyn Griggs was the low scorer of the day for Gray Stone with a round of 86 over the 18-hole competition, finishing sixth overall out of 53 golfers. Mount Airy’s Alyssa Cox earned medalist honors with the low round of the day, a 74.

Griggs’ teammate, Lauren Denhard, finished one stroke behind Griggs, tying for seventh overall with Josie Fisher of Lake Norman Charter with an 87.

Aliza Simpson rounded out the scoring for Gray Stone with a 107 with the top three finishers for each team counting for the team score.

Also for Gray Stone, Riley Ritchie finished with a 117, tied for 43rd overall.

Phillips believed in preparing for regionals his team could qualify for states but Gray Stone “but had to play their game and not worry with what the other school’s players were doing. They went out and did just that and for about an hour I thought we were going to actually win the Central Region. ”

He later thought he could not be more proud of his team with the regional runner-up trophy but added he was wrong.
South Stanly also had two golfers qualify for regionals. Emma Crump finished tied for 43rd overall with a 117, while her teammate, Jackie Burris, shot a 123 to finish 49th.