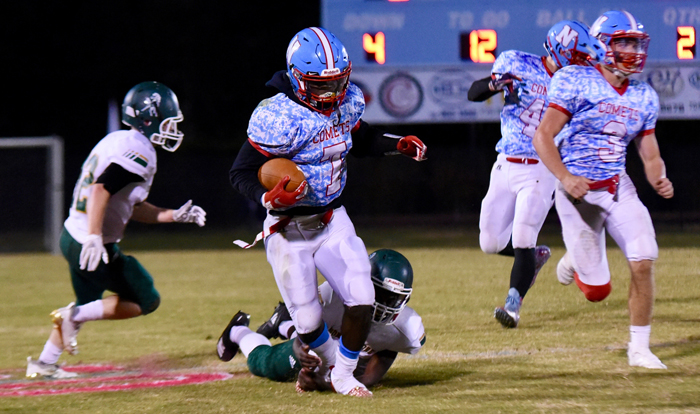 Comets running back D.J. Rhone gets free in the second quarter of a North Moore tackler in North Stanly's home win on Thursday. (Photo by Dawn Lucas)

The North Stanly football squad continued to roll through the Yadkin Valley Conference schedule on Thursday night at home against the North Moore Mustangs.

North Stanly’s offense scored early and often in a 64-0 drubbing of the Mustangs, tying a school mark for the second-most points scored in a game by the Comets. North Stanly had previously scored 64 points in a win over South Davidson on Sept. 20, 2013. Thursday’s point total was 11 short of the all-time Comets mark, 75, set against South Davidson in 2014.

D.J. Rhone added 94 yards on six carries with two rushing touchdowns along with a 30-yard touchdown pass from Bailey Baker.

Also for North Stanly, Christian Barber had 31 yards on four carries with a touchdown while Karee Dykes added a rushing touchdown as well.

Through the air, Baker was 5-for-9 for 102 yards and three touchdowns. Along with his TD pass to Rhone, Baker threw two touchdown strikes to L.J. Rush. The senior wideout finished with 60 yards on three catches.