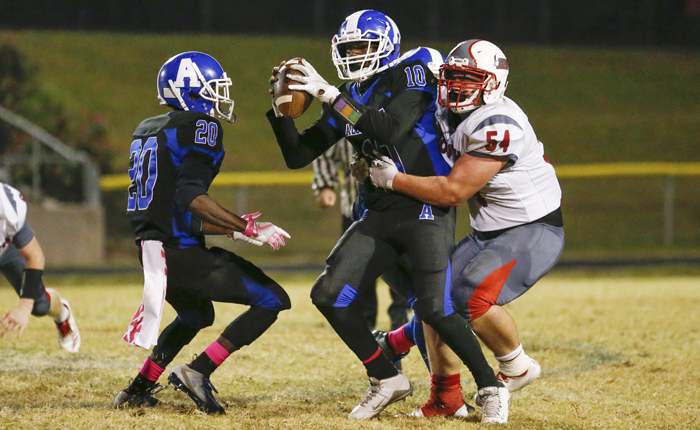 Heavy predicted rains for Friday night moved the Yadkin Valley Conference matchup at Albemarle between the Bulldogs and the South Stanly Rebel Bulls up to Thursday night.

South overcame an early deficit and saw three players gain more than 100 yards each on the ground in a 34-6 win over the Bulldogs.

Despite missing the team’s leading rusher to injury, Khris Mayo, South Stanly (7-3, 5-1 YVC) amassed 376 net yards on the ground. Tony Loftin led in yardage for South with 164 yards on 10 carries, including two long touchdown runs. Quarterback Jaquez Cooke added 111 yards on the ground and a touchdown while Marcus Green scored twice and finished with 106 rushing yards.

Albemarle (3-6, 3-3) was also missing its leading rusher due to injury, Eli McCall. The Bulldogs had 151 yards on the ground with Julius Smith leading the way. Smith rushed for 88 yards and a touchdown.

Neither team had many passing yards in the game. Albemarle was 2-of-13 through the air for 23 yards, with the Bulls sacking quarterback Manaurian Hall four times in the game. South also posted nine tackles for a loss for a combined -30 yards.

South was 2-of-8 for seven yards through the air and Cooke was sacked once. The Bulls also were tackled seven times for a loss for -12 yards.

The game had a number of penalties called. The Bulldogs were whistled 11 times for 69 yards while South had 55 yards on eight flags.

The Bulls drove down to the Albemarle 23 on the next drive but lost another fumble, which proved to be the final turnover of the game for South. The Bulldogs took full advantage, driving 80 yards in just five plays, including a 48-yard run by Josh Smith. His brother, Julius, finished the drive with a sweep to the left for 16 yards and the touchdown, hurdling one tackler right at the goal line. Monta Hall’s point-after attempt hit the left upright and bounced back, leaving the Bulldogs up 6-0 with just under two minutes left in the first quarter.

South answered immediately with a 10-play, 55-yard scoring drive, taking four minutes off the clock. The Bulls converted one early fourth down, then caught a break when Cooke threw incomplete on another fourth down. But a roughing the passer penalty kept South’s drive alive. Two plays after the penalty, Cooke scrambled to his left and out raced one defender to the corner of the end zone for a 15-yard touchdown. Brandon Crump’s extra point gave South a 7-6 lead.

The visitors continued to break long runs in the game on the team’s next drive. Starting at the Bulldogs 44 after a short punt, Cooke was stopped on first down. The next play saw Green bust through the right side of the South offensive line then carry an Albemarle defender into the right corner of the end zone at the pylon for a touchdown. Crump’s point-after put South up 14-6.

Albemarle went three and out, giving the football back to South on the Bulls’ 47. South drove down to the Bulldogs’ four-yard line, but Cooke was stopped on a bootleg to the left.

The Bulldogs got the opening kickoff of the third quarter and got one first down but punted down to the South 17. The visitors answered with a scoring drive covering 83 yards in four plays. Cooke scrambled up the middle for 50 yards, following it with a 19-yard run down to the Albemarle 6. Green then scored up the middle on a dive play. Crump’s extra point made it a two-possession game, 21-6.

Both teams exchanged the ball on punts for the next four drives heading into the fourth quarter. Albemarle opened the final drive with its best offensive drive since scoring in the opening period. The Bulldogs moved 41 yards down to the South 33-yard line. With two chances needing two yards, Hall was stopped on third and a Josh Smith sweep was stopped by Davis Moose on fourth down.

South’s Tony Loftin continued the big-play theme of the night on the fourth play of the Bulls’ next possession. Loftin busted through the middle of the line and outraced Albemarle to the end zone for a 51-yard touchdown. Crump tacked on the point-after to put the visitors up 28-6.

Loftin struck one final time in the game after a short Bulldogs punt set the Bulls up at the Albemarle 45. Loftin broke through again for a 36-yard touchdown up the middle. Crump’s extra point was no good, leaving the Bulls up 28 points, 34-6.

Moose talked about the South pass rush, saying since the summer the defensive lineman of the team, including himself, Cade Whitley and Jitavis Huntley, “have been hitting the weights and getting after it in practice.”

South head coach Ryan Ochier said this season, his first with the Bulls, has been a season of firsts, including having three rushers gain more than 100 yards in a game. Ochier said that “is a major accomplishment,” noting Mayo, a 1,000-yard rusher, was not able to play.

“That says a lot about what these kids can do and what they do for each other…we have a four-headed monster and the other three heads came out tonight,” Ochier added.

Talking about the pass rush, Ochier said he knew coming in Albemarle “would have a challenge with our directional blitzes. We come from every direction, every angle. With mixing them up like we did, (Albemarle) struggled up front.”

The Bulls have several goals on the line heading into this week’s game at North Stanly (8-2, 6-0). A win for South would force a three-way tie in the Stanly Cup standings as well as potentially in the YVC standings. The Bulls could further secure a home playoff game as well as a bye in the first round with a win as well.

“We control our own destiny,” Ochier said.