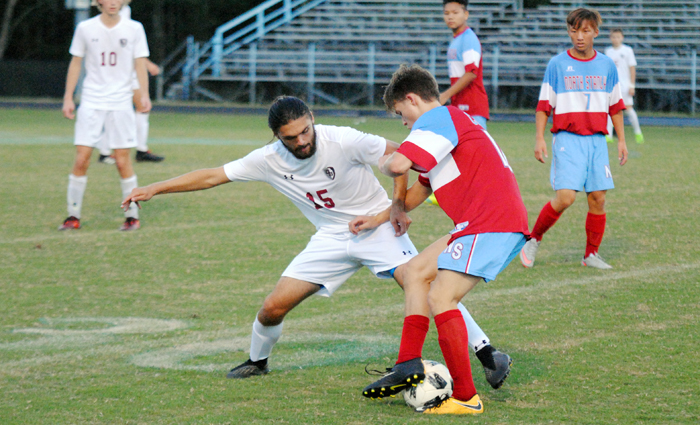 Gray Stone senior Chase Viscomi (No. 15) battles North Stanly's Bryson Childress in a match this season between the Knights and Comets. Viscomi set the Gray Stone mark for most goals in a season in Thursday's win over Uwharrie Charter. (Photo by Charles Curcio)

The Gray Stone men’s soccer team wrapped up its 2018 regular season with a home match Thursday against the Uwharrie Charter Eagles.

Gray Stone improved to 13-7-1 overall and 11-3 in the Yadkin Valley Conference, having already secured a second-place finish, with an 8-0 win over the Eagles.

Gray Stone senior Chase Viscomi set a new mark for goals in a season with a huge night against Uwharrie. Netting six goals in the game, Viscomi broke his own record of 35 set last season. With Thursday’s efforts, Viscomi has 36 goals this season.

Viscomi recorded a natural hat trick by scoring three goals in the first 16 minutes of the game. Zack Norman assisted Viscomi’s first goal in the ninth minute, then Almond added an assist on Viscomi’s tally three minutes later. Erich Strohecker sent a cross toward the net in the 16th minute, headed in by Viscomi to wrap up the hat trick.

But Viscomi and the Knights were not finished there. Almond assisted on Viscomi’s fourth goal in the 24th minute, then scored his own goal 13 minutes later, assisted by Prior Sparks. The Knights led at halftime 5-0.

The record-setting goal for Viscomi came in the 68th minute, assisted by Andrew Beohler.

The Gray Stone head coach added he has coached Viscomi for three seasons, one year at Park Ridge in eighth grade and the past two seasons, Viscomi’s junior and senior seasons with the Knights.

“It has been fantastic to see his growth from that 8th grade year to now, on and off the field,” Harrington said. “He is a great teammate, competitor and young man as evidenced by recognizing he would not have been able to accomplish this feat or score all the goals he has during his career without his teammates being there, playing with him, and supporting him along the way.”

Gray Stone will qualify for the NCHSAA 1A state soccer playoffs. Brackets are scheduled to be released on Wednesday, with the first round to start Saturday.