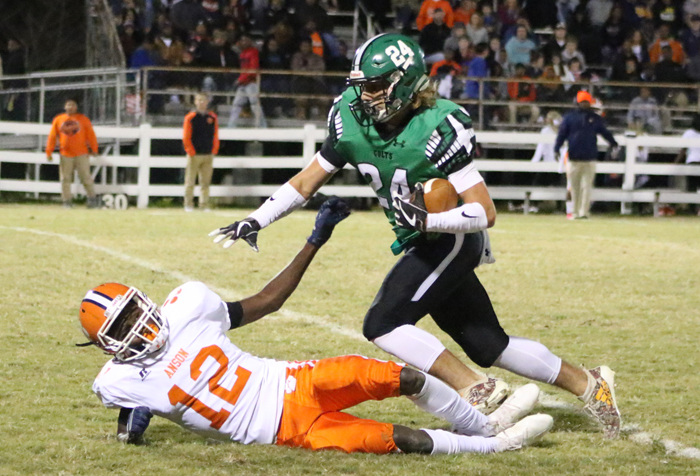 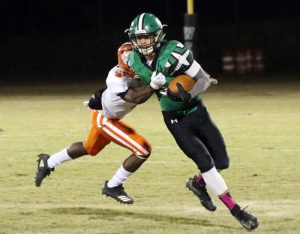 Two of those seniors on the football team made several big plays in the game. Lukas Scott scored four touchdowns, including one in overtime, and assisted the efforts of senior Jake Hinson on defense in overtime to lift the Colts to a 35-34 win.

Hinson tackled Anson quarterback Wesley Lear in the backfield on a two-point conversion attempt in overtime which if successful would have given the win to the visiting Bearcats. The senior also had an interception in the first quarter which set up the Colts for a touchdown.

Scott had a huge night in his final regular-season home game for West (6-3, 3-0 RRC), finishing with 145 rushing yards and three touchdowns on the ground. He added a fourth touchdown when quarterback Nick Parker hit him with a swing pass for a 10-yard score in the opening frame of overtime.

Jordan Poole added a rushing touchdown and 43 yards on the ground. For the game, West finished with 190 net yards on 48 carries.

West also did not punt in the game, only losing possession of the football once on a turnover coming on a fourth down. The Colts were also strong on third down, converting seven out of 12 times.

The offense for Anson (4-5, 1-2) generated 343 total yards of offense in the game. Dequan Sturdivant was the leading rusher for the Bearcats, scoring two rushing touchdowns on 161 net yards carrying the ball 19 times.

Lear was 5-of-11 through the air for Anson with two touchdowns and 66 passing yards with the one interception.

The Bearcats were hampered at several junctures by penalties, committing 13 infractions for 96 yards. West was whistled eight times for 71 yards.

West took the opening kickoff and put together a drive typical of the Colts this season. The hosts marched 60 yards down the field on 11 plays, taking 5:31 off the clock. Parker found Poole for a 19-yard gain on third down, then three plays later Scott scored to give West the initial 7-0 lead.

Anson answered with an 82-yard scoring drive in five plays, including long runs of 34 and 16 from Sturdivant. Valen Pressley, who finished with 68 yards on three attempts, busted through the middle of the line for a 27-yard touchdown. Justin Ledbetter’s extra point got the Bearcats back within a score, 14-7.

Early in the second quarter, Anson tied the game with another long drive (84 yards) on five plays. Pressley ran for 40 yards to start the drive, then Lear converted a long third-down finding R.J. Jackson for a 19-yard pass. Sturdivant then finished the drive with a 25-yard touchdown run. The extra point tied the game at 14.

West’s next drive went to the Anson 3-yard line but did not yield points when Parker was sacked by Jawon Powe on fourth down. Neither team scored in the final three minutes of the first half, leaving the game tied at halftime.

Anson went three-and-out on the first drive of the second half, and the Colts responded with a six-minute drive that did not produce points as Cruz’s 41-yard field goal attempt was wide left.

The Bearcats took the lead following the missed field goal for West, driving 80 yards in five plays. Lear ran 33 yards down field, then on the next play connected with Sturdivant for a 30-yard touchdown pass. The point after put the visitors up 21-14.

West answered the Anson touchdown with one of its own on a 10-play, 65-yard drive spanning into the fourth quarter. The Colts converted two third downs as well as got into the red zone with an acrobatic 22-yard catch from Hunter Stoker between two defenders. 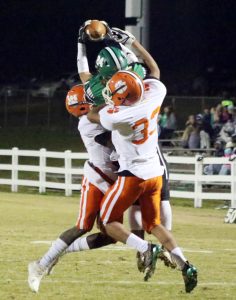 Hunter Stoker goes up between two Anson defenders and comes up with a critical catch in West’s home win Monday over Anson County. (Photo by James Brown).

Daquavion Griffin set the Bearcats up on the ensuing kickoff with a return to midfield. Anson scored five plays later when R.J. Jackson delivered an over-the-shoulder catch from Lear for a 23-yard score and a 28-21 lead.

Scott answered immediately for West after his kickoff return got down to the Anson 47. Scott got huge blocks from the left side of the Colts’ offensive line as he broke through down the home sideline for a 47-yard touchdown. Cruz again tied the game with a PAT, 28-28.

Anson put together a long drive, taking all but the final four seconds of the game. The Bearcats drove from midfield down to the West 21 on 11 plays, including converting a fourth down. However, on fourth and 17, Lear’s pass was over the head of his target.

West took over and ran out the final four seconds of regulation, sending the game to overtime.

On the Colts’ possession, Scott gained three yards but Poole was tackled for a three-yard loss. On third down, Parker hit Scott with a swing pas around the 5; the senior battled his way through defenders into the end zone. Cruz’s extra point put West up 35-28.

Sturdivant nearly scored on Anson’s first play of overtime, coming up just short at the 1-yard line. He scored two plays later, pulling the Bearcats within one point.

Anson head coach Ralph Jackson decided to go for the two-point conversion and the win rather than tying the game. Later he said he chose do go for it because the Bearcats “were in a hostile environment,” adding “sometimes you have to pull yourself up by your bootstraps and go for it all.”

The play by Anson saw one man come in motion across the formation, which was a tip off for Jake Hinson. He said when he saw that man in motion he “knew it was a quarterback run so I had to go for it.”

West got the stop on the conversion for the victory, the Colts’ third straight win and fifth win in the last six outings.

Coach Jackson said later regarding the outcome he will still “stand tall with my chest out” in the morning after the game. “We gave the players a chance to win the game; I believed in them. We’re not where we need to be (as a team) but we are moving toward that.”

Jackson, a former standout football player at West and the former North Stanly head coach, gave the West Stanly coaching staff credit, saying they and the players “never gave up.”

The win “means everything,” Jake Hinson said, adding he was “so proud of how hard everyone played.”

Scott said he saw something from everyone on the West sideline before the Anson conversion attempt he had not seen before: grit.

“Just like we have on the back of our jerseys, we were not going to let (Anson) have that. It’s something we haven’t always had in big situations. We turned it around and made it happen,” Scott said.

“You don’t tug on Superman’s cape and they did. At the end of the day, maybe they should have let that sleeping dragon lay and they didn’t. I’m glad he’s on our side,” Morton said.

Morton said the philosophy going in was “run what you’ve brung,” meaning the Colts stuck with the team’s schemes going in. He added ”sometimes, you just have to stay patient…Anson played hard all night, but at the end we made one more play than they did.”

The Colts will play at Mount Pleasant (5-5, 3-0 RRC) on Friday night for the Rocky River Conference championship.