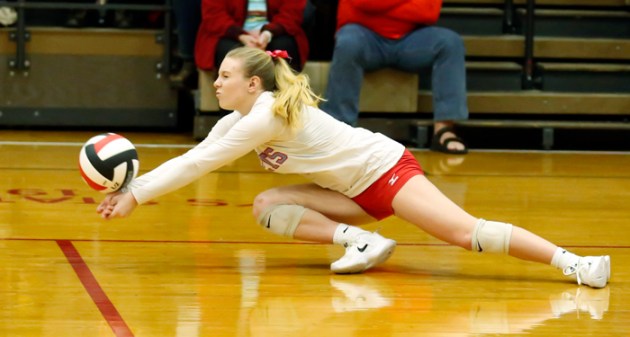 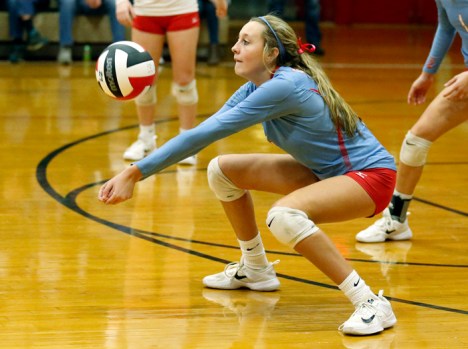 The 2018 North Stanly volleyball season has been one of setting high marks. No Comet volleyball team had either won a regular-season conference championship in recent memory, especially not with a perfect conference mark. 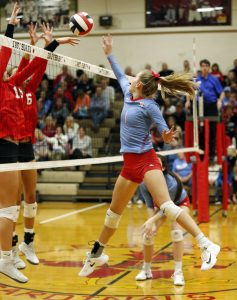 North Stanly earned a No. 8 seed in the playoffs and, after two home wins, went on the road Saturday to Pilot Mountain to take on the top seed in the West, the East Surry Cardinals.

The Comets rallied to take the first set in extra points, but the hosts rallied to win the next three sets in a 3-1 victory for the Cardinals over North. 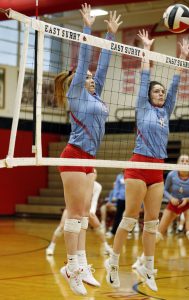 East Surry’s tipping ability at the net helped the Cardinals build an early lead in the first set. Talbert and Taegan Lowder each had kills to pull the Comets ahead early, 8-5.

The Cardinals came back and led by as much as six points, 20-14, on a block from Holt, following a North timeout. Back to back Nicole Lowder kills spurred a short run for North, but East Surry pushed the lead back to five, 22-17.

North then scored the next five points, including two kills from Taegan Lowder and an ace from Nicole Lowder, which tied the set.

The two teams exchanged points, forcing extra points. East Surry served on game point two times, but a kill from Carter and a service error tied the match at 26. Talbert gave North the edge with a kill, making it 27-26 North, but a service error by the Comets tied the game. After East Surry’s kill attempt went long, Nicole Lowder gave North the win with a kill at the net, 29-27.

Winning the first set woke a sleeping giant, however, when the Cardinals came storming out of the gate in the second set. Misplays by North put East Surry up 4-1 early, then later an ace from McCraw along with tip kills put the Cardinals up 8-2, forcing a North timeout.

The Cardinals’ offense continued to roll after the timeout, as kills from Holt and Allie Bruner gave the Cardianals a 14-7 advantage. East Surry got two kills off North blocks and went up double digits late in the set. A Morgan Smith kill on game point gave the Cardinals a 13-point win, tying the match at one game each.

In the third set, the scores were close early. Ahead 5-1, two shots wide by East Surry got the Comets within two points. North later got as close a two points, 7-5, when a long service reception by East Surry floated over the net and Carter delivered the kill.

Talbert’s kill several points later got North within two again, 8-6, but the Cardinals scored the next four, including a mishandled serve by the Comets. North called timeout trailing 12-6.

From that point in the game, East Surry outscored North 13-2, taking advantage of two balls blocked out of bounds and three attacks into the net. The Cardinals took the advantage in the match, winning the third set.

North rallied and came out strong in the fourth set, matching the Cardinals point for point including kills from Nicole Lowder and Talbert. A Childress ace later in the set gave North its first lead of the final set, 7-6.

The Comets led midway through the fourth on a Talbert tip, 11-9, then a kill from Talbert, 13-12. Smith responded with a tip kill starting a 7-3 run for East Surry. North called timeout trailing 19-15. 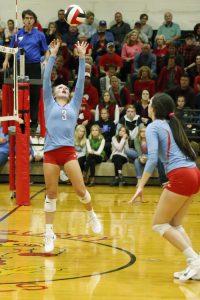 East Surry then got a solo block from Holt for a point and a Holt kill, giving East Surry a 23-17 lead, forcing the Comets to take the team’s final timeout.

A service error gave North one point, but the Cardinals scored the final two points to win the match.

“In the first set, I thought we really had it,” North head coach Kadie Morgan said. “We were pushing hard, playing hard; (the players) played their heart out.”

Regarding the rest of the match, Morgan said North “beat ourselves…we were definitely evenly matched. They got up on us and we made errors…when we play as a team we are unbeatable.”

Morgan also talked about the Cardinals’ ability to get tip kills at the net, saying East Surry was “phenomenal” and the Cardinals “tipped around our blocks.” She also credited East Surry with having great serving ability.

Regarding the season, Morgan said “we came together as a team. I told the girls from the beginning that we have all the talent in the world.”