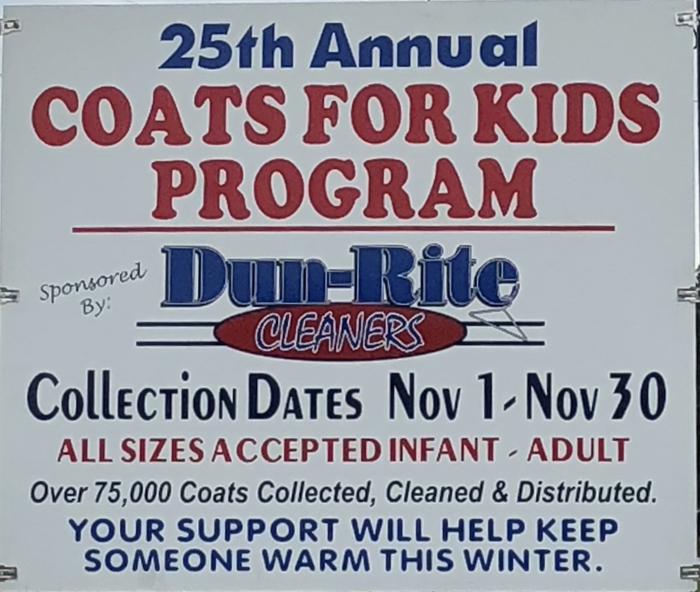 Individuals can donate coats at Dun-Rite Cleaners in Albemarle and Locust.

What began as an idea at a convention nearly 30 years ago has become one of the longest running campaigns of its kind in the state.

Dun-Rite Cleaners officially begins its 27th year of its Coats For Kids campaign today. The drive, which has brought in more than 75,000 donated coats in its history, will last this year until Nov. 30.

It was originally intended to just help those in need locally, but it has grown into something bigger than the county.

“A lot of our coats are going to be earmarked for the folks in the Hurricane Florence area because it is just devastation down there,” Mark Dry of Dun-Rite Cleaners. “The need is substantial in the county and the state.”

Any size new or gently-used coat, from infant to adult, will be accepted.

“We’ve got several groups in this town like the retired teachers association. They’ll go out and buy toboggans, gloves and accessories to go with the coats,” Dry said.

The idea for the campaign began at the annual meeting of the North Carolina Association of Launderers and Cleaners. Members were looking for a way of how dry cleaners could become more involved in their communities, Dry said.

During its first couple years, people would clean out their closets and donate anything too small or unworn to the drive.

“Now more and more people are, if they don’t wear a coat for a year, they just go ahead and donate it,” Dry said.

“People will go out and buy a brand new coat, like a Panthers jacket,” Dry added. “Some people spend a lot of money. They’ll got out and buy a designer coat for someone they know who would never go out and buy a coat like that or be able to afford one.”

After the drive ends, Dun-Rite will get them cleaned, sized and packaged to go to distribution points.

“We really enjoy doing this program. We really like giving back to the community,” Dry said.

Coats can be dropped at Dun-Rite’s headquarters at 1223 Pee Dee Ave., Albemarle, or at its office in western Stanly at 1808 W. Main Plaza, Locust. Hours are 7 a.m.-6 p.m. Monday through Friday at both locations.