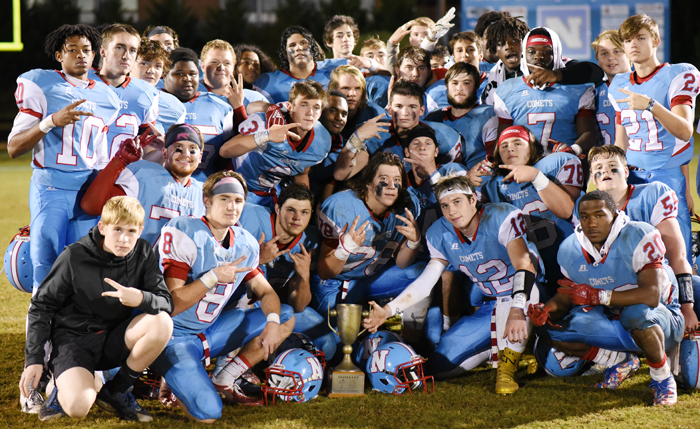 Among the stated goals coming into the 2018 football season for North Stanly and head coach Scott Crisco, two were to keep the Stanly Cup, emblematic of the county title, while also winning the Yadkin Valley Conference championship outright.

Friday’s regular-season finale at home against South Stanly afforded the Comets the chance to accomplish both tasks. North did so in dominating fashion in a 42-0 shutout of the Bulls.

North became the first team to shut out all three county opponents in one year since Albemarle won the Cup in 2003 going 16-0 en route to the 1AA state title. The Comets also finished undefeated in YVC play for the second straight season with an active 17-game regular-season conference win streak dating back to 2016. 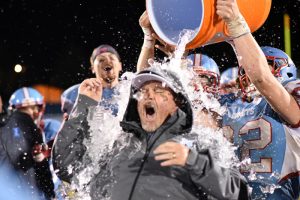 The two-headed rushing monster of Cam Davis and D.J. Rhone combined for 249 of North’s 289 rushing yards in the win, with both scoring twice on the ground. Rhone had 154 net yards on seven carries while Davis carried the ball 16 times for 95 net yards.

North (9-2, 7-0 YVC) also got one of the best games of the season from quarterback Bailey Baker. The senior was 8-for-1 for 80 yards, including a touchdown pass to Rhone midway through the second quarter.

The Comets’ defense, minus injured defensive lineman and N.C. State commit C.J. Clark, limited South Stanly (7-4, 5-2) to 128 total yards of offense. South quarterback Jaquez Cooke was sacked four times, including two from Dylan Eudy, which lowered his net rushing total to 61 yards. Cooke was 4-of-14 through the air, throwing one late interception.

North also made big plays on special teams, blocking two South punts which both led to short fields and touchdowns for the Comets. Levi Oliver, the team’s starting kicker after North lost Addison Cord to a leg injury for the remainder of the season, kept the Bulls pinned deep with deep kickoffs.

South started the game well on offense, taking the opening kickoff and earning two first downs, moving into North territory. However, they were forced to punt.

The two teams exchanged possessions, with no points scored until Rhone turned an off tackle run to the left side of the line into a 70-yard scamper down the North sideline. Oliver’s extra point put the Comets up 7-0 late in the first quarter.

South went three-and-out on its next possession but Brandon Crump’s punt attempt was blocked by Wes Reynolds down to the one-yard line. North took over and Cameron Davis scored his 87th career touchdown as a Comet two plays later to go up 14-0.

North added another touchdown capping a four-play 66-yard drive with just over eight minutes left in the first half. Davis ran for 21 yards with 15 more tacked on for a late hit out of bounds on South. On the next play, Baker found Rhone behind two South defenders in the end zone for a 30-yard TD pass. Oliver’s point after made it 21-0.

The Comets looked to be stopped by South on North’s next drive. Davis was tackled for a loss by Chase Kimrey on third down back to the Bulls’ 25-yard line. On fourth and 9, Baker faced an all-out blitz faking handoffs to both backs in the backfield and keeping the ball on a draw play. The senior went through the line untouched and raced 25 yards downfield for a touchdown and a 28-0 advantage.

South’s best drive of the night in terms of distance down field came in the final three minutes of the half. The Bulls drove from the team’s 26-yard line down to the North 24, but Cooke was sacked by Eudy on fourth down, preserving a 28-0 lead at halftime.

North’s first punt of the game came on the opening drive of the second half but the Comets again stopped South on three straight plays and got the ball back. Three plays later, Rhone burst through the middle for a 44-yard touchdown.

Another blocked punt by the Comets late in the third set up North for its final touchdown. UNC recruit and Shrine Bowl selection Drew Little returned the ball to the South 5. Two plays later, Davis scored his 20th rushing TD of the season and 88th rushing touchdown overall, adding to his school record.

With a running clock into the fourth quarter, South tried to mount a scoring drive, going from the Bulls’ 20 to the North 29. Again, Cooke was sacked by Eudy on fourth down to end the drive.

“Our front line has really stepped up and applied pressure all season. Our defensive backs have stepped up and not given up near as many touchdowns as last year,” Eudy said.

Regarding the loss of Clark, who is out with a torn labrum in his shoulder, Eudy said North “had a couple of young people step up, come in and fill his job just fine.”

North’s quarterback talked about the Comets’ offensive development all season long, saying the Comets “do a good job of keeping teams off balance. We have two great running back, our wide receivers can go get the ball and our line gives us time to throw the ball.”

Crisco talked about winning the Cup on North’s home field while also posting shutouts in the three county matchups.

“It was very special. It’s something we’ve been talking about since the beginning of the season,” Crisco said.

He added his coaching staff “got it rolling. They put a game plan together; we stick together. They execute every day in practice.”

North will be off until the second round of the state playoffs and will not play until hosting on Nov. 23.

The Bulls will qualify for the postseason as well and may play in the first round on Nov. 16.