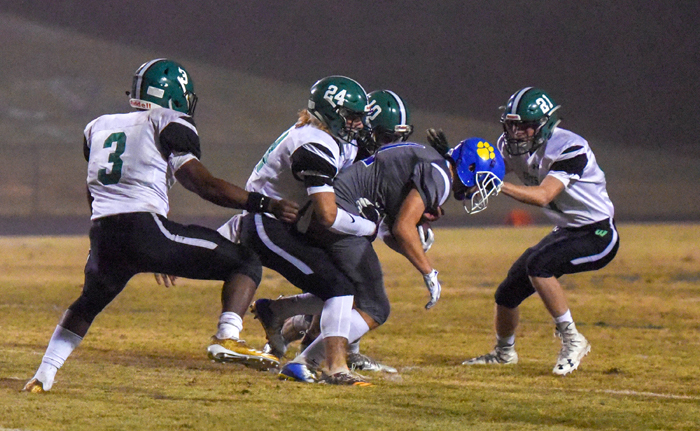 Both West Stanly and Mount Pleasant had a chance to make school football history in Monday’s regular-season finale with the Rocky River Conference title on the line.

The Colts had the chance to win the team’s first outright football conference crown. West was co-champions with Forest Hills in 2006.

Mount dominated the ground game early with long scoring drives and gained more than 400 total net yards of offense in a 46-6 win over West.

Mount quarterback Chance Daquila threw two first-half touchdown passes, finishing with 89 yards on 4-of-7 passing. He was intercepted once early in the second half by West’s Jaquan Ingram.

In the win, Mount also had 30 first downs and dominated time of possession, keeping the ball 30:36. The Tigers were efficient on third down also, converting 5-of-7 times, and did not have a punt in the game.

On the ground, Jordan Poole finished with 36 yards on eight carries. For the game, West had 66 net yards on 32 carries, including yards lost on sacks and fumbles.

West had seven penalties in the game for 60 yards while the Tigers had 30 penalty yards on four flags.

The two teams took to a muddy, wet field on Monday night after the game was postponed from Friday due to incoming rains. A constant drizzle caused large clouds of fog to form around the stadium lights at Mount Pleasant.

On the opening kickoff, the Tigers went for an onside kick but did not recover the ball. West took over on the Colts 42 and moved briefly into Mount territory, but Parker was sacked back into West territory by Robert Tyler.

Aldo Cruz punted to the Tiger 19, where Mount started the first of two long scoring drives. The hosts marched down the field 81 yards on 14 plays, converting three times on third down on a drive taking 6:28 off the clock. Honeycutt finished the drive with a two-yard touchdown. Mount Pleasant went for two but was stopped short, leaving the hosts up 6-0.

A return by West’s Hunter Stoker on the ensuing kickoff gave the Colts good field position at the Mount 45. West drove six plays down field, including converting a fourth-down and 1, but on the next play a problem with the exchange caused a fumble. Cade McDonald recovered the fumble for the Tigers.

Mount then burned nearly five minutes off the clock on an 83-yard, 10-play scoring drive. Garrett Overbay ran for 31 yards on the drive, which Honeycutt finished with a seven-yard touchdown. The Tigers again went for two and were stopped, leaving Mount up 12-0.

West lost possession on its next drive with another fumble, this one recovered by Ian Tomblin. Following a 15-yard personal foul call on the visitors, Daquila found Fisher Furr for a 39-yard touchdown pass. The extra point attempt was blocked, leaving Mount up 18-0.

Mount was not finished in the first half after stopping West on a three-and-out. Long runs by Honeycutt set up a 28-yard touchdown strike to McDonald from Daquila. The Tigers’ signal caller then found Ayden Honeycutt wide open in the end zone for the two-point conversion, putting Mount up 26-0.

West drove to the Mount 43 late in the first half, but on fourth down Parker was sacked by Overbay.

In the final 16 seconds, the Tigers took another shot downfield when Daquila found McDonald for a 42-yard touchdown, but a holding call negated the score. Mount then took a knee and a 26-point lead into halftime.

West’s best drive of the game came early in the third quarter. The Tigers took the opening kickoff of the second half, but Daquila was picked off on the second play of the drive by Ingram at the Colt 12. West then drove 68 yards down field on eight plays, but fumbled at the Tigers 20, recovered by Noah Berryman.

Mount added to its lead with a five-play, 80-yard touchdown drive, including three runs of 10 or more yards. Robert Tyler scored on a 12-yard run up the middle, with Owen Prifti’s extra-point extending the Tigers’ lead to 33-0.

Another try at an onside kick went the Tigers way, but the Colts’ defense stopped Mount on fourth down at the West 26.

Early in the fourth quarter, Mount took advantage of a short West punt to drive 37 yards in four plays for a score, all on runs by Berryman. The point after put Mount ahead 40-0.

Mount’s fourth forced turnover of the night, an interception of Parker by Ian Downey, set up the final scoring drive of the night for the Tigers. Backup quarterback Brett Laws and Mount went 57 yards in nine plays, with Anthony Eury’s 10-yard touchdown run starting a running clock with a 46-0 score.

With the clock running as Mount set up for the kickoff, the Tigers kicked deep to Ingram, who used his speed to burst through the Tigers’ kick coverage for an 80-yard touchdown return. Ingram was then stopped short of the goal on a two-point conversion, leaving the final score 46-6.

“We didn’t execute on offense. We made uncharacteristic mistakes,” West head coach Brett Morton said, noting the fumbles in the game stopped potential scoring drives which was “almost unrecoverable…we didn’t need to do what we needed to do to hold onto the ball.”

“The things that’s been great about us the last 3-4 weeks is we have gotten better and better. We have faced some really tough defensive lines,” Johns said.

He added the RRC is offensive-heavy, with a lot of high scoring teams.

”A lot of the key players in our conference play on offense,” he said. “With us, we have tried to maintain a defensive presence. Last season, we had a great defense, probably the best I’ve ever coached. The coaches kept pushing…we are playing at a very high level headed into the playoffs.”

Both the Colts and the Tigers will be playing on Nov. 16 in the opening round of the state playoffs. Brackets are set to be released Saturday.